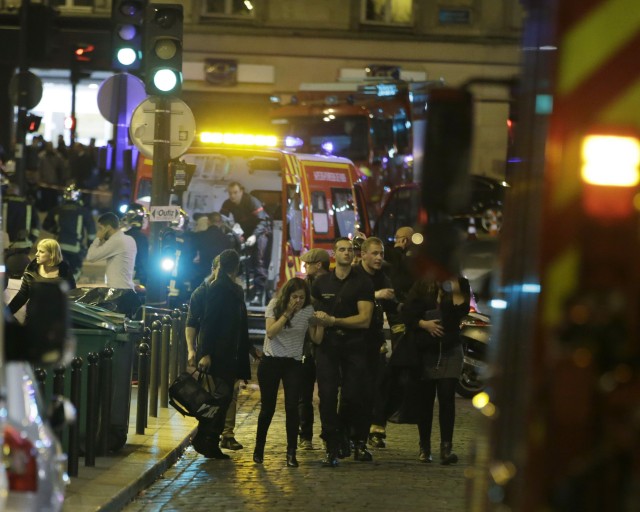 German police say they are questioning three people arrested near the western city of Aachen after a tip that one of them might be linked to the Paris attacks.

Police spokesman Werner Schneider says the trio were arrested Tuesday morning by a SWAT team in Alsdorf, just northeast of Aachen and near the border with Belgium.

The two women and one man were arrested as they left a job center at around 9:30 a.m., according to local media reports.

Schneider said on German news channel n-tv that it was "much too early to go into detail" about the identity of those arrested, but said they were foreign nationals.

He says police were conducting searches in the area.

2:05 p.m.: A high school class in New York state has canceled a class trip to Paris because of concerns over security.

Jim Thomas, a French teacher at Irondequoit High School near Rochester, tells WHAM-TV that he notified 26 students that the trip to Paris was called off after one of the French chaperones, a member of the military, told him it wasn`t safe to go there.

The trip had been in the works for two years.

1:50 p.m.: Belgium is to deploy up to 300 extra soldiers to help provide security in major cities.

A government statement on Tuesday said the extra troops would allow police to take on additional duties since authorities raised the threat level over the weekend.

The move would bring the total number of troops in the streets to 520.

The Paris attacks on Friday are believed to have been partly organized in Belgium, and a number of police raids have been conducted in Brussels since then.

Police are particularly concerned about public safety at large gatherings like sports events, concerts or rallies.

1:40 p.m.: The Eiffel Tower has closed again, one day after it reopened following the Paris attacks.

Spokeswoman Marthe Ozbolt says the tower did not open Tuesday morning. She did not give a reason but alluded to the current situation in the city.

The landmark reopened to visitors Monday after being shut for two days after the Paris gun and bomb attacks that killed 129 people.

On Monday night it was lit in the red, white and blue of France`s tricolor flag. Buildings around the world have shown the colors in a sign of solidarity with France.

1:40 p.m.: NATO is providing support to France in the wake of the Paris attacks but has not triggered a little-used defense clause that would mobilize the armies of member countries.

The secretary general of the world`s biggest military alliance, Jens Stoltenberg, said Tuesday that "many NATO allies have offered France support and help, and we are doing so in many different ways."

He told reporters on Tuesday at an EU defense meeting in Brussels that NATO allies were sharing intelligence and working closely with France to fight the Islamic State group.

NATO`s Article 5 has only ever been triggered once, by the U.S. after the Sept. 11 attacks. The article designates an attack on one of the 28 allies as an attack on them all.

1:35 p.m.: Austria`s interior ministry says a key suspect sought in Friday`s Paris terrorist attack is known to have entered the country about two months ago.

Abdeslam, 26 is the suspected driver of one group of gunmen carrying out the attack. French police accidentally permitted him to avoid arrest at the border Saturday and cross to Belgium.

Abdeslam`s brother, Brahim, was among the suicide bombers and killed one civilian when he blew himself up.

1:30 p.m.: A French judicial official says two brothers linked to the Paris attacks both rented residences in the days prior to Friday`s carnage.

The official, who has knowledge of the case, told The AP that one of the Abdeslam brothers used an online rental site to book lodging at a long-stay hotel in the southeastern suburb of Alfortville Wednesday.

The official spoke on condition of anonymity because she was not authorized to speak about the ongoing investigation.

The official said that the other brother rented a house in the northeastern suburb of Bobigny, the day before, on Tuesday Nov. 10.

The official could not identify which of the two brothers, Brahim Abdeslam, who died on Friday, or Salah Abdeslam, who is a fugitive, rented which residence.

1:25 p.m.: German police say three people have been arrested near the western city of Aachen in connection to the Paris attacks.

The dpa news agency reported Tuesday that the three were arrested in the town of Alsdorf, just northeast of the city.

Local police did not immediately answer their telephones and no other information was available.

1:10 p.m.: Prime Minister David Cameron`s office says he will join Prince William at the friendly soccer match between England and France in a show of solidarity with France after Friday`s attacks.

Police in London promise a robust presence at Wembley Stadium on Tuesday to reassure the public. The match has been the subject of concern because the targets in Paris included Stade de France, where tens of thousands were watching Germany play France.

Scotland Yard says armed police officers will be visible - unusual in a country where many officers don`t carry guns.

To underscore solidarity with France, British fans will be encouraged to sing the French national anthem.

12:55 p.m.: A lawyer for one of the two people arrested in Belgium in the wake of the Paris terror attacks says his client admits going to France, but says it was only to pick up a friend.

Defense lawyer Xavier Carrette told The Associated Press on Tuesday that his client, Mohammed Amri, 27, was arrested over the weekend and is being held on charges of terrorist acts and being part of a terrorist conspiracy.

Belgian media reports said Amri and another person arrested in the Molenbeek-Saint-Jean neighborhood of Brussels, identified as Hamza Attou, are being investigated as potential suppliers of the suicide bombs used in Friday`s attacks, since ammonium nitrate, a fertilizer that can be used to make explosives, was discovered in a search of their residence.

12:50 p.m.: French Sports Minister Patrick Kanner has praised security officials at the Stade de France for keeping their nerve when faced with the attacks that hit Paris last week. He says a major tragedy had been avoided.

The Stade de France was packed with 79,000 fans when three terrorists blew themselves up outside the venue, killing one bystander and injuring several dozen others.

Kanner, who attended the friendly game between France and Germany on Friday and returned to the stadium on Tuesday to thank its employees, said the decision to keep spectators inside after the blasts was decisive "because a Heysel-type panic could have happened."

Kanner referred to the former Heysel stadium in Brussels where 39 people died during fan violence at the 1985 European Cup final between Liverpool and Juventus.

12:50 p.m.: Germany`s vice chancellor says "we must not change our lives" out of fear in the wake of the terrorist attacks in Paris.

Speaking in a video podcast Tuesday, Sigmar Gabriel said Germany would improve border controls, deploy more police officers, and do everything possible to work with other European security agencies.

But he also says the "best defense against terror and violence" from the so-called Islamic state is to work prudently and with determination.

He says "we do not need new security laws, nor should we change our lives, our lives together, our culture, or our events out of fears of terrorism."

12:45 p.m.: Finland says it is "ready and willing to assist France with means available."

Prime Minister Juha Sipila wrote Tuesday on Twitter that the Nordic country will "abide by the mutual assistance clause," adding Finnish lawmakers already have been informed of the government`s decision.

In Denmark, Foreign Minister Kristian Jensen said the Scandinavian EU member could not participate in a military operation within the European Union framework because of 1992 Danish defense opt-out. Jensen stressed Danes could take part if such calls were made within NATO or the United Nations.

12:35 p.m.: Two French officials say that a car found in northern Paris with Belgian license plates could be linked to Friday`s attacks.

The black Renault Clio with a shattered front passenger window was discovered Tuesday near the commuter train line that links to France`s national stadium, a site targeted by three suicide bombers.

It`s unclear how the window was broken.

The officials refused to be identified because they were not authorized to speak publicly about the investigation.

It is the third car identified as having possible links to the Paris attacks.

Moving to reassure Londoners following the Paris attacks, Bernard Hogan-Howe says he believes the city has the capability to thwart such attacks for now, but he is reviewing the number of armed police officers. Only about 2,000 of London`s 32,000 officers carry firearms.

Hogan-Howe told LBC radio that "Paris showed us, with so many attackers with so many scenes, moving around at speed ... we need to have a mobile reserve."

He says he hopes soccer fans will be reassured by additional officers being deployed to the international friendly between England and France Tuesday night.

Rouhani pointed the "crucial importance to fight against terrorism and Daesh with all our might", the official says, speaking anonymously in line with government policy.

Both presidents agreed to quickly reschedule a visit by Rouhani to France.

Rouhani had planned to come for a two-day visit on Monday and Tuesday, but canceled following the attacks.