How Kerry could be key to Karabakh conflict 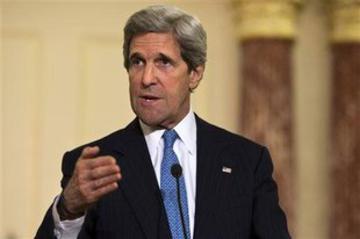 AzVision.az reprints an article from The Washington Times an article by Alexandros Petersen.
As President Obama visited Israel to achieve some movement on the Israeli-Palestinian question, not so far away, another of the world’s most intractable conflicts simmered, threatening to boil over outside of the media spotlight. This is the ongoing low-grade conflict between Azerbaijan and Armenia over Nagorno-Karabakh. The difficult to pronounce name is often used as a synonym for “obscure, overly-complex ethnic conflict in which the United States should not become embroiled,” but the fact is that Washington is already deeply committed, to the point that the only way of washing its hands of the mess is to achieve conflict settlement.

Late last month, Secretary of State John F. Kerry stated as much when he wrote to the president of Armenia that “we cannot be satisfied with the status quo” in the conflict. Mr. Kerry is well-versed in the intricacies of Nagorno-Karabakh, because as a senator, he represented a particularly active cohort of Armenian-Americans. Their lobbying in Congress has led some Azerbaijanis to intimate that the new secretary of state might be biased toward the other side in the conflict, but it seems that Mr. Kerry has left his constituency’s concerns behind him to focus on U.S. national interests.

In this case, it is very much in the American interest to solve a conflict that could at any moment boil over to destabilize an already uncertain region just north of Iran and not far from NATO’s borders in Turkey. It is tenuously contained right next to one of the world’s most important energy arteries stretching from the Caspian to Europe. U.S. diplomats have spent decades carving out a pipeline and transport corridor that threads through the Caucasus region between inhospitable Russia and Iran. A re-ignition of the conflict in the next year-and-a-half could jeopardize troop withdrawal plans from Afghanistan through the corridor.

The United States, France and Russia head the so-called Minsk Group, a negotiating framework sponsored by the Organization for Security and Cooperation in Europe, to find a solution to the conflict. The problem with the framework, however, and a key reason that the conflict has simmered since the end of the Cold War, is that one of the major players has an interest in the conflict’s perpetuation.

Russia is Armenia’s closest ally and has a deep strategic interest in maintaining its military power in the Caucasus. Russia maintains its 102nd Military Base on Armenian territory, with more than 3,000 combat troops, hundreds of tanks and armored vehicles, as well as MiG aircraft and anti-aircraft defenses. Russian forces patrol Armenia’s borders and Kremlin-backed firms control the majority of Armenia’s economy, including its entire energy sector. A defense treaty with Moscow obligates Russia to defend Armenia in case of war, including an escalation in the Nagorno-Karabakh conflict. Moscow has no such relationships with Azerbaijan. In fact, at the moment, Russian technicians are leaving Azerbaijan’s largest radar facility as part of a deal agreed to late last year to sever the last vestiges of Soviet-era ties.

Given this enormous imbalance, it would seem impractical to have Russia serve as a mediator in the conflict. After all, it is treaty-bound and has ready capabilities to take a side should the conflict re-ignite. Yet, it has been U.S. policy not only to welcome Russia’s role in the Minsk Group negotiating framework, but to encourage Russia’s highest leadership — Prime Minister Dmitry Medvedev most recently — to serve as the primary mediators between Azerbaijan and Armenia.

Granted, this is partly due to the fact that President Obama has bigger fish to fry at the moment, both domestically and internationally. Still, as long as Washington allows Moscow to set the terms of conflict negotiation, the conflict will remain unsettled and the United States will remain embroiled in an obscure, overly complex mess that could boil over and disrupt the bigger fish that America has to fry, whether that be the withdrawal from Afghanistan or the confrontation with Iran.

Far from being a source for concern, Mr. Kerry’s familiarity with the conflict provides an opportunity for the United States to craft a better strategy for settlement in Karabakh, one in which Russia’s interests are seen for what they are: counterproductive. In this case, the deep involvement of a U.S. secretary of state would go further in getting results than the ongoing disingenuous efforts of a Russian president. Mr. Kerry has his work cut out for him, but he may well be the best man for the job.
This article was published in The Washington Times.
Alexandros Petersen is the author of “The World Island: Eurasian Geopolitics and the Fate of the West” (Praeger, 2011).