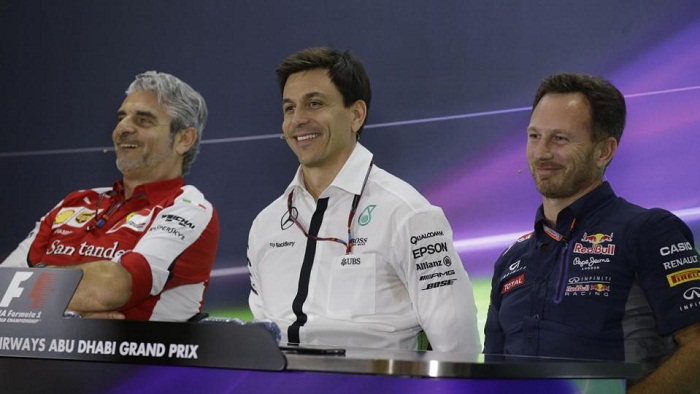 Formula One`s engine manufacturers had their first meeting Saturday to discuss ways of reducing costs for teams and head off the threat of the sport introducing a cheaper independent engine.
The sport`s governing body, the FIA, had put out tenders for the manufacture and supply of independent engines, and received interest from several companies. Current engine suppliers used their regulatory power to block the idea — saying it hurt their business plans — and instead pledged to come up with their own way of reducing costs for customer teams.

The current engine suppliers — Mercedes, Ferrari, Renault and Honda — plan a series of meetings before reporting back proposals on Jan. 15 to the F1 Commission, which represents major parties involved in the sport.

Ferrari team principal Maurizio Arrivabene said "we are going to work seriously toward a new solution," while Mercedes team principal Toto Wolff agreed that "costs of supplies is a very legitimate cause."
"We are going to come back with, hopefully, a concept that is workable, financeable and that ticks all those boxes," Wolff said.

The FIA has said that if the proposals from the current manufacturers were not good enough, then the idea of an independent engine — whose cost to teams would be subsidized —will be revived and could be in place for 2017.

For Arrivabene, that may be way too soon, saying "we try to do our best but even the Wizard of Oz couldn`t be able to do it for 2017."

Renault, which is purely an engine supplier but currently in discussions about taking over Lotus and becoming a team owner again, said reducing costs too much could destroy the business case for being involved in the sport.

"We need to be extremely careful about whatever can threaten or destabilize our business case in Formula One, and subsidizing the cost of engines to independent teams — even though we appreciate it might be a necessity to be in the sport and to have a healthy sport — is something that is endangering the business case," Renault motorsport chief Cyril Abiteboul said.

The introduction of complex V6 hybrid-power engines in 2014 had largely transformed the sport — moving from aerodynamic design being the decisive factor in a car`s competitiveness to the power unit being the key, while making those power units vastly more expensive. Christian Horner, team principal of Red Bull, which gets its engines from Renault and is the most politically powerful of the customer teams, said that was "a mistake."

"It`s expensive. The technology is fantastic but we`re not doing a great job of communicating that, and it`s put a situation where probably half the grid is currently insolvent," Horner said.

The Red Bull chief went further, and said teams should not be involved in deciding any of the sport`s rules, including engine regulations.

"Formula One should be entertainment. It should have a technological interest to it, but that needs the promoters and the owners of the sport, together with the regulators, to decide what that product is and come up with a set of rules, not let engineers write those rules," Horner said.

"(Formula One) is competing against an awful lot of other sports that are now demanding television air time, and it`s got to be entertaining from start to finish. Technology plays a role but I don`t believe it needs to be the primary role. That should be about the drivers and out-and-out racing."