If Iraq must be divided, here`s the right way to do it 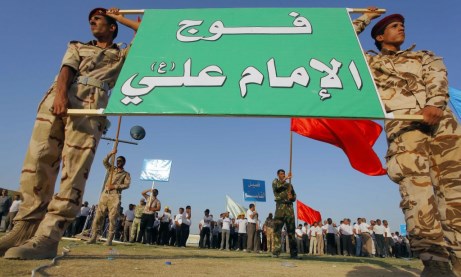 Shi`ite volunteers, who have joined the Iraqi army to fight ISIL, hold a sign during a graduation ceremony in Najaf

As Iraq spirals toward chaos and its Kurdish region talks independence, the issue of partition, or federalism, has resurfaced. This is a concept that then-Senator Joe Biden strongly advocated in 2006. Though it would be difficult to accomplish, federalism could still be a helpful element as Iraqis struggle through their current tragic mess.

The appeal of federalism could grow if Iraqi leaders in Baghdad cannot agree soon on a government of national unity, ideally one without Prime Minister Nouri al-Maliki, who has proven so divisive. Whether a “soft partition” — meaning the creation of a Sunni autonomous zone to complement the existing Kurdish one — or “hard partition” –meaning the formal redrawing of regional lines — it would seem a natural idea. Not only because of the recent violence, which has caused hundreds of thousands of Iraqis to flee their homes, but also the arbitrariness with which state borders were drawn by the European powers after World War One.

We did a study of the possible soft partition of Iraq in 2007, and found that the new Sunni autonomous zone would need the following:

A proportionate share of Iraq`s total oil revenue (perhaps 15 percent to 20 percent) because the Sunni regions generally lack oil resources;
An arrangement with Baghdad allowing Sunnistan police to patrol the region`s cities on a routine basis, but with Sunnis, Shi`ites and Kurds continuing to support a national army for the country`s overall defense;
A means for Sunnis to safely sell their property so those seeking to leave places like Baghdad (now roughly 10 percent to 15 percent Sunni) could settle in the new autonomous region with enough means to buy homes;
An economic transition fund to help create job opportunities for resettled Sunnis;
Clearly defined, enforced and monitored minority rights for all Iraqis choosing to stay in regions where they are not in the ethnic/sectarian majority, an inevitability since many Iraqis are in mixed marriages, and
Physical protection by a combination of national and local security forces for people relocating.
These ideas should be part of the public conversation today as Iraqis debate their political futures.

Members of the new Iraqi parliament attend a session at the parliament headquarters in BaghdadThe Iraqi constitution even allows for these possibilities. The idea of a Sunni autonomous region, largely protected from any further predations by future Shi`ite leaders in Baghdad, may even persuade moderate Sunni leaders at the national, provincial and tribal levels to support a new government of national unity. In other words, it could help resolve the current crisis.

That said, partition cannot be seen as an alternative to cooperation by Iraqi political leaders across sectarian lines. In fact, to be stabilizing and consistent with U.S. national security goals, restructuring Iraq via one of these means must be done collaboratively, not by fiat by one group or because of developments on the battlefield.

Here`s why. The fundamental U.S. and European goal in Iraq now is neither an intact Iraq nor a partitioned one. We can live with either outcome. The important objective is the defeat of the Islamic State of Iraq and the Levant (or ISIL), the terrorist group that now controls large swaths of both Syria and Iraq with its extreme brutality, its strong allegiances to an al Qaeda-like ideology and its ambitions to do even more damage in the region and beyond.

To defeat this group, the West needs the moderate Sunni leaders of Iraq to turn against the Sunni militants and take the lead in the fight, working with the United States through whatever military means we ultimately decide to provide. That cannot happen if these Sunni leaders wind up living in a rump state of “Sunnistan,” created by battlefield realities not political accord, lacking natural resources, unfunded by the central state of Iraq and with significant numbers of their fellow Sunnis still living in diverse cities like Baghdad, where they could be vulnerable to possible Shi`ite pogroms.

Shi`ite volunteers secure the area from predominantly Sunni militants from the Islamic State in the desert region between Kerbala and NajafTo be effective, partition needs to be carefully managed and fair. A Sunni-majority region, to parallel the Kurdish autonomous zone (or a new Kurdish independent state), could perhaps begin slightly north and west of Baghdad and extend up to Mosul in the north and include towns like Fallujah and Ramadi on the way to the Syrian border in the west.

In the end, what is needed is a joint campaign plan for defeating the Islamist militants that is developed and supported by the United States and the region, but led by Iraqi Shi`ite and Sunni and Kurds. That remains the ultimate and nonnegotiable objective.