Obama: `Not a new Cold War` 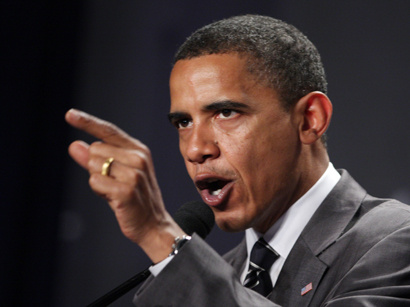 President Obama announced a new round of U.S. sanctions against Russian banks and a shipbuilding company Tuesday, saying Russia must pay an increasingly high price for its military aggression in Ukraine and the downing of a passenger jet.

The penalties follow tougher sanctions in an agreement reached by European Union leaders earlier in the day.

“Today is a reminder that the United States means what it says,” Mr. Obama said on the South Lawn of the White House. “It didn`t have to come to this. There continues to be a better choice.”

Mr.Obama urged Russian President Vladimir Putin to agree to a diplomatic solution to the crisis, which began when Russia annexed the Crimea region from Ukraine in March.

According to the Treasury Department, the latest U.S. penalties target the Bank of Moscow, the Russian Agricultural Bank and VTB Bank. Also listed on the Treasury designation is the United Shipbuilding Corp., based in St. Petersburg, Russia.

Mr. Obama told reporters that the crisis is “not a new Cold War,” but said Russia’s actions “have made a weak Russian economy even weaker.”

“The issue is how do we prevent bloodshed in eastern Ukraine,” he said.

The round of sanctions, he said, was a sign of growing impatience over “nice words from President Putin that are not matched by actions.”

The European Union agreed Tuesday to place sanctions on broad sectors of the Russian economy, marking an escalation of the bloc`s response to Moscow’s role in provoking the conflict in eastern Ukraine.

Some EU members, notably Germany, had been reluctant to impose sanctions until the downing this month of a Malaysia Airlines jetliner that killed all 298 people aboard. The West blames a missile fired by Russian-backed separatists.

The EU action will target finance, dual-use equipment with possible military applications and oil production equipment. The penalties will curtail the ability of Russia`s state-owned banks from borrowing on European markets.

An embargo also will be imposed on Russia`s arms trade and restrictions on exports of militarily sensitive goods and technology.

Along with the sanctions, Secretary of State John F. Kerry demanded that Russia compel separatists in eastern Ukraine to accept a cease-fire. The West has accused Russia of massing thousands of troops on the Ukraine border and shipping heavy weapons to the rebels.

The EU and U.S. previously imposed asset freezes and travel bans on individual Russians and pro-Russia separatists in Ukraine.

Some national security analysts say the latest restrictions are not tight (The Washington Post).