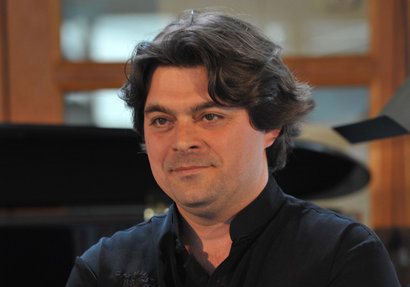 Azerbaijan`s culture is powerful and magnificent, according to the well-known French composer, Pierre Thilloy.

"I have been visiting to Azerbaijan for more than 14 years now. From an emotional point of view, I have been deeply moved by Azerbaijani music. Hearing this music for the first time was truly a shock to me. I didn`t understand why nobody was listening to it in France and Europe," Thilloy said in an interview with Trend.

Pierre Thilloy lived in Azerbaijan and worked at the French Embassy in Baku between 2003 and 2005. Since 2008, he has been regularly visiting the country, and is making great efforts to promote the history and culture of Azerbaijan abroad. He is the author of the classic musical composition Khojaly 613, dedicated to the Khojaly tragedy.

Thilloy noted that he decided to include a piece of work from Azerbaijan into his program.

"The purpose was to enable other people to discover what I have discovered. Azerbaijani culture is powerful and magnificent; it has no cause to be envious of anyone else," he said.

"But one day, I felt it was not enough," Thilloy stressed.

Thilloy`s interest in Azerbaijani national music and his desire to let it be heard by as many people as possible, led to the idea of creation of Festival de Syam.

The festival, which was held between July 4 and July 11, 2014 in the ancient Chateau de Syam in the Jura Mountains, was organized by the Heydar Aliyev Foundation. The foundation realizes projects for direct acquaintance of the French people with cultural values of Azerbaijan.

Festival de Syam was dedicated to the Azerbaijani national music and over 100 composers, performers and musicians took part in it. Thilloy said that all this were happening at the same time with Azerbaijan`s presidency in the Council of Europe.

"The council includes 47 countries, meaning forty-seven pieces of work, one for each country. But in the end, we did a lot more: more than 60 Azerbaijani pieces were played during the festival, between July 4 and July 11, 2014," he added.

The composer highlighted the important role played by the Heydar Aliyev Foundation in the organization of the festival.

"Without Heydar Aliyev Foundation, there would not be a festival," Thilloy stressed.

"I had a great honor to meet Mehriban Aliyeva, First Lady of Azerbaijan," he said. "And I introduced my project on Azerbaijani music to her."

"I had the privilege to receive Heydar Aliyev Foundation`s support, to accelerate the work on the festival. Such amazing support was very motivating to me and I wanted to do even more," he said.

Thilloy went on to add that Mehriban Aliyeva`s unconditional support to the culture of Azerbaijan can be praised endlessly.

The composer said he has no knowledge of any other country giving its generous support with such a dedication.

"For instance, every single spectator of the festival could return home with a book, a CD and also taste delicious Azerbaijani pastries. Everybody was delighted and admiring, sharing pure joy. The festival, positive emotions from the participants - Heydar Aliyev Foundation made this all possible," he underscored.

Thilloy noted that promoting culture is one of the greatest goals in the world, and the Heydar Aliyev Foundation is doing that with an incredible virtuosity. The composer noted that Azerbaijan`s first lady definitely deserves a credit for that.

"I deeply admire Azerbaijani first lady`s work in this area," Thilloy said. "She has a tremendous energy when it comes to show how great Azerbaijani culture is. This made me want to introduce people to all the aspects of Azerbaijan`s culture that I love so much. We have to be grateful for what she does for the development of culture."

Thilloy also said he discovered mugham on his first trip to Azerbaijan.

"Usually, when I visit a country for the first time, I immediately go to a music store or a record store to locate some local traditional music. It tells you a lot about the country you are in and its citizens. In my opinion, a country that knows how to keep its national music (traditional music and folk music are priceless) is a strong country," the composer underscored.

Thilloy said he has always been impressed by the way the people in Azerbaijan are connected to the national music.

"One day, I witnessed a surprising scene at the Baku airport, a scene that would never occur in France or Europe. We were all waiting to get our passports checked when I saw four police officers listening mugham on a smartphone. They were truly amazed by what they were listening. I was thrilled, and since then I have never ceased to be surprised by this country," Thilloy noted.

Thilloy said this tells a lot on how culture is perceived in Azerbaijan.

"Here, culture is alive and known by everyone, from the working class to the high summits of the state. I dream about it for France, but unfortunately, this is just a dream."

"Now, as far as my perception of this music is concerned, I have included mugham, as Uzeyir Hajibeyli did, in symphonic music," Thilloy stressed. "It is enough to tell how much I love the music. It is rich and fully connected with people`s humanity. It is really strong and really beautiful. This is a big lesson for culture and humanity."

The French composer said he is happy to promote these values.

"This is not a jobbut a true honor for me."

Speaking about Azerbaijan, Thilloy said the country is close to his heart.

"I share with Azerbaijan its joys as well as its sorrows. And with the music I am composing, I want to pay a tribute to Azerbaijan."

"Music soothes the soul as they say... But above all, music is powerful without any words pronounced. It directly speaks to men`s and women`s hearts and it strokes their souls like a sensible string that you can`t smear or damage," he added.

"For Nietzche, without music, life would be a mistake. He was so right."

Thilloy said that is why minds and hearts of people are looking for peace throughout the piece they are listening.

"May our hearts and minds rise together to reach the souls of the victims of Khojaly and bring them peace. And above all, this is a way to say we still care about them. We will never forget them," the composer underscored.

It was first performed in London Feb. 26, 2013 in the St John`s Church on Smith Square. In the musical composition, Pierre Thilloy synthesized Western classical music with traditional music of Azerbaijan.

Thilloy said he worked a lot with Azerbaijan musicians and hopes to do so for a long time, as a life-long collaboration.

"I would like to show people how powerful and virtuoso is Azerbaijan`s school of music," he said, adding that he has spent a lot of time in Baku, where he met many artists and composers.

"I discovered so many beautiful things. You have something in Azerbaijani culture that does not exist in our country. In fact, Azerbaijan is like a country from the Tales of the Arabian Nights...wonderful culture and values that makes you proud and happy to be connected with Azerbaijan. I love this country!"

The composer went on to add that the easiest way to share his feelings is to look at the music he wrote.

"Azerbaijan is in my heart, and I am telling this with respect and love. It is true," Thilloy said in conclusion.