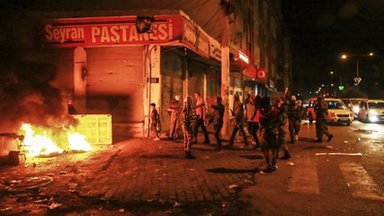 The nationwide protests broke out after Islamic State of Iraq and the Levant (ISIL) militants penetrated the Syrian Kurdish town of Kobani, known as Ayn al-Arab, on Monday. The protesters claimed the Turkish government had done nothing to halt the relentless advance of the militant group in the Syrian city, which has become a scene of fierce streets battles between Kurdish groups and ISIL militants.

Clashes between protesters, many of whom showed their support for the Kurdistan Workers’ Party PKK – which is outlawed in Turkey -, and security forces broke out in a number of major Turkish cities.

Police used tear gas and water cannon to disperse pro-Kurdish protesters across the country who had set up barricades, set fire to buses and cars and attacked police with fireworks and stones.

On Wednesday, Turkish police clashed with a group of masked people who set fire to a school in the Yuksekova district of the southeastern Hakkari province. The security forces used tear gas and water cannons against the stone-throwing demonstrators.

In Ankara, a group of people staged a sit-in protest and blocked traffic. As they threw rocks at the police, they were dispersed with tear gas.

Three people wounded during the demonstrations in Bingol province and three police officers also were wounded in Yalova province. A police officer and a soldier were injured during protests in Siirt.

The Bitlis provincial governorate declared curfews in the district of Hizan in eastern Turkey and closed schools for one day, as in the city of Diyarbakir. Schools are closed for two days in Batman and Hakkari provinces.

Turkish officials have said the country was against supporting armed PKK-offshoots in Kobani with military and financial aid, even if they are fighting against ISIL.

The PKK is listed as a terrorist organization by Turkey as well as by the U.S. and the European Union.