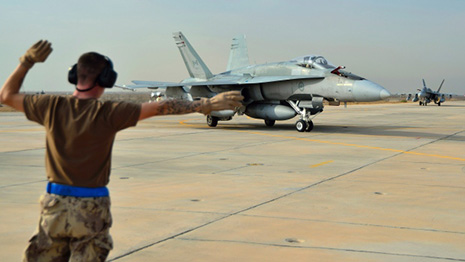 Canadian CF-18 fighters jets have dropped laser-guided bombs over Iraq for the first time as part of the ongoing combat mission against ISIS, the Department of National Defence confirmed Sunday, CBC News reported.

Two CF-18s targeted ISIS positions with laser-guided GBU-12, 500-pound bombs "in the vicinity of Fallujah," a large city in central Iraq about 70 kilometres west of the capital Baghdad, according to a statement released by Minister of National Defence Rob Nicholson.

Fallujah is infamous among U.S. soldiers as the scene of the heaviest fighting during the decade-long American war in Iraq.

The Iraqi government lost control city in January when Islamic State fighters clashed with police following the withdrawal of the Iraqi army from all of Anbar province. Fallujah has since been an ISIS stronghold.

The mission lasted approximately four hours, the statement said, and included an air-to-air refuelling of the fighter jets by a CF-150 Polaris aircraft. All aircraft made it safely back to base.

The statement did not say what kind of Islamic State targets were hit. American and other coalition warplanes have destroyed military vehicles and positions, but also economic targets, such as oil refineries, which provide the extremist organization millions of dollars per day.

The planes that flew the sortie are part of a contingent of six CF-18s, two CP-140 Aurora surveillance aircraft and a Polaris operating out of air bases in Kuwait. The combat mission, which began with the first patrols last week, has been carried out under a heavy blanket of secrecy with the Canadian military denying media access to the bases, citing security concerns of their Kuwaiti hosts.

It was the first time Canadian fighter jets have struck ISIS targets since arriving in Kuwait on Oct. 30 to join the U.S.-led coalition currently carrying out airstrikes in Iraq and Syria. Aircraft and personnel from the U.K., Australia, France and multiple Gulf states are also participating in the campaign known as Operation Inherent Resolve.

The Canadian air presence over Iraq — dubbed Operation Impact — has been limited to six months, but could be extended at the end of that period. Some 600 personnel are involved in the mission.

As part of its commitment, Canada has also shipped about one million kilograms of military supplies to Iraqi security forces, who it is helping to train.

An assessment of the mission`s success continues, and more information will be made available Nov. 4, the statement reads.