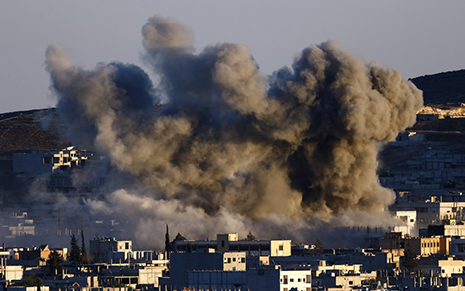 The Syrian Observatory for Human Rights, which monitors the civil war, said heavy clashes erupted in Kobani and that both sides had suffered casualties, while the U.S. military said it had launched more air raids on Islamic State over the weekend.

Idriss Nassan, deputy minister for foreign affairs in Kobani district, said Iraqi Kurds using long-range artillery had joined the battle on Saturday night against Islamic State, which holds parts of Syria and Iraq as part of an ambition to redraw the map of the Middle East.

"The peshmerga joined the battle late yesterday and it made a big difference with their artillery. It is proper artillery," he told Reuters.

"We didn`t have artillery we were using mortars and other locally made weapons. So this is a good thing."

Nassan did not elaborate and it was not immediately possible to verify that progress against Islamic State had been made.

The arrival of the 150 Iraqi fighters -- known as peshmerga or "those who confront death" -- marks the first time Turkey has allowed troops from outside Syria to reinforce Syrian Kurds, who have been defending Kobani for more than 40 days.

ALL EYES ON KOBANI

"They are supporting the YPG. They have a range of semi-heavy weapons," said Jabbar Yawar, secretary general of the peshmerga ministry in the Kurdish region in northern Iraq, referring to the main Syrian Kurdish armed group.

Eyewitnesses in the Mursitpinar area on the Turkish side of the border from Kobani said two rockets were fired on Saturday night.

A Reuters witness said fighting on Sunday was heavier than in the last two days, noting a strike in the late morning and the sound of three explosions.

Attention has focused on Kobani, seen as key test of the effectiveness of American air strikes, and of whether combined Kurdish forces can fend off Islamic State, an al Qaeda offshoot made up of Arabs and foreign fighters.

Air strikes have helped to foil several attempts by Islamic State, notorious for its beheading of hostages and opponents, to take over Kobani.

But they have done little to stop its advances, in particular in Sunni areas of western Iraq, where it has been executing hundreds of members of a tribe that resisted its territorial gains.

In their latest air strikes, U.S. military forces staged seven attacks on Islamic State targets in Syria on Saturday and Sunday and were joined by allies in two more attacks in Iraq, the U.S. Central Command said.

U.S. and partner nations hit small Islamic State units near the Iraqi cities of Baiji, north of Baghdad, and Falluja, in Anbar province to the west of the capital.

The ultra-hardline Islamic State regards Iraq`s majoriy Shi`ites as infidels who deserve to be killed.

The group is expected to try and deploy suicide bombers to inflict mass casualties as Shi`ites prepare for and take part in the religious festival of Ashura, an event that has been marred by sectarian bloodshed in the past.

The worst attack took place when a bomb exploded near a tent in the Sadr City area of the capital.

Shi`ite militias and Kurdish peshmerga fighters stepped in to try and fill a security vacuum after U.S,-funded Iraqi military forces crumbled in the face of an Islamic State onslaught in the north in June.

While the Kurds have retaken some territory with the support of U.S. air strikes in the north, Islamic State faces limited resistance in Iraq`s western Anbar province, where its militants last week executed over 300 hundred members of the Albu Nimr tribe because it had defied the group for weeks.

In the first official confirmation of the scale of the massacre, the Iraqi government said Islamic State had killed 322 members of the tribe, including dozens of women and children whose bodies were dumped in a well.

The systematic killings, which one tribal leader said were continuing on Sunday, marked some of the worst bloodshed in Iraq since the Sunni militants swept through the north in June.

The Albu Nimr, also Sunni, had put up fierce resistance against Islamic State for weeks but finally ran low on ammunition, food and fuel last week as Islamic State fighters closed in on their village at Zauiyat Albu Nimr.

Since Islamic State declared a "caliphate" in large areas of Syria and Iraq in June, the militants have lost hundreds if not thousands of fighters in battles against other Sunni rebels, Islamist groups, forces loyal to Syrian President Bashar al-Assad and in U.S.-led air strikes.

Fighters inside the group say that it receives hundreds of volunteers every month, which helps it carry our more attacks. It also received pledges of allegiances from Islamist groups in places such as Pakistan, Africa and some Arab states.