Brainwashed: ISIS is Training Kids To Be Terrorists - VIDEO 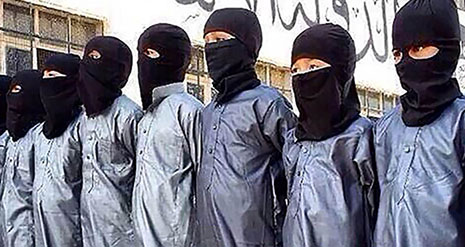 ISIS Trains Child Soldiers at Camps for `Cubs of the Islamic State`
eir guns are as big as they are — which is not saying much.

On the streets of Syria and Iraq, ISIS militants are building a small army — literally. The use and recruitment of child soldiers is a war crime. It`s also a practice which ISIS has boasted of in photos and videos splashed across the Internet with titles such as the "Cubs of the Islamic State."

Instead of archery and merit badges of Cub Scouts, these boys learn how to clean, disassemble and shoot machine guns. While their peers in the U.S. build campfires, ISIS` diminutive devotees go from Quranic recitation drills to the front line of battle.

“They teach them how to use AK-47s,” one Iraqi security official told NBC News on condition of anonymity. “They use dolls to teach them how to behead people, then they make them watch a beheading, and sometimes they force them to carry the heads in order to cast the fear away from their hearts."

Some graduates of the camps are used as human shields and suicide bombers. Other wee warriors man checkpoints, hoist heavy weapons and act as enforcers.

Beyond the additional fighting power, analysts and experts say brainwashing young recruits is a strategic move aimed at ensuring the militant group’s longevity by providing a ready-and-willing next generation of jihadis.

"It`s being done for the same reasons that Hitler had the Hitler Youth," explained Charlie Winter, of the Quilliam Foundation, a London-based anti-extremist think tank. "That`s effectively what we`re seeing here — military training and ideological training."

The potent blend of military training with ideology is especially dangerous for impressionable minds, which is exactly why ISIS is targeting the young.

"There`s no term better suited to it than brainwashing," Winter said. "These children won`t have any point of reference other than jihadism so the ideology will be a lot more firm in their heads and a lot more difficult to dislodge."

While the use of child soldiers in Syria is not an abuse unique to ISIS, it is “most prominent” with the group, according to Winter, and billed as a necessary “education.”

"It`s something to be expected because we know that they have and are trying to be a state — which means they have to have an educational system," he said. "Obviously though it`s not going to be secular — teaching evolution and stuff — but going to be teaching the principles of jihad."

Those principles are being taught at several camps throughout Iraq and Syria. There is at least one inside Iraq’s city of Mosul and another just outside it, according to the Iraqi security official. In Syria, one of the primary ISIS camps for kids can be found on the outskirts of Damascus in East Ghouta, according to Flashpoint Intelligence — a global security firm and NBC News counterterrorism consultant. Flashpoint said that that that camp is called the “Zarqawi Cubs Camp” in tribute to the founder of al Qaeda in Iraq, and that there is another camp in the Atareb area of Aleppo, and at least one more in Al-Bukamal, in eastern Syria.

"They have to get used to hearing the sounds of explosions and machine guns ... They should used to get to seeing blood"

ISIS has set up enlistment offices aimed specifically at signing up youngsters — including one in Aleppo. The recruits are drawn from all over: some volunteer, others are roped in by parents who have come to take up arms.

“Many of those children don’t actually have a choice," Flashpoint`s Laith Alkhouri said, adding that "they ultimately end up joining their fathers on the front lines."

Once the children are registered, extreme indoctrination begins. There is "radical mental training," according to Alkhouri, which includes intense Quranic memorization sessions and schooling in Shariah law. Then comes the militarization.

The “class” cycle is quick. Analysts estimate that the cubs typically graduate within a two-week to one-month time frame. "Most of these kids don’t fight right away," Alkhouri explained. They`ll start by accompanying older militants to the front lines to get "acclimated" and only later engage in battle.

Still, “whether they engage in battle today is somewhat irrelevant,” according to Alkhouri. “They will be engaging in battle, they will be fighting in battle. It’s a matter of time.”

The camps typically cater to around 40 to 60 kids, according to Alkhouri, but once one class graduates another is ready to take its place. He said that the focus on children is not just about replenishing ISIS’ ranks but keeping the “cycle of radicalization going.”

“In two, three, four years they’re going to be adults. By raising them up on this ideology and methodology, it becomes part of their everyday life,” Alkhouri said. “These kids are going to grow up, abide by and adhere to the ideology and carry out what ISIS want.” 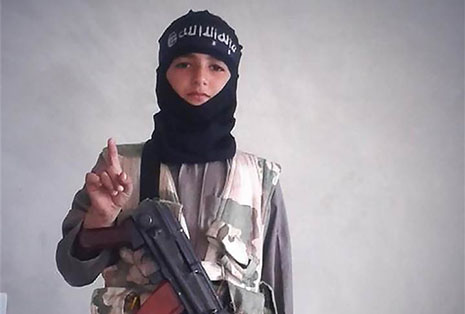 A self-proclaimed Syrian fighter with ISIS tweeted images of this boy, who he says is his son, proclaiming that he is "the youngest fighter with the Islamic State" on October 28.

Most of the details of the boys` training is limited to the imagery and propaganda pushed out by ISIS itself. In videos, young boys clad in camouflage share lunch and later target practice. Chubby-cheeked kids flash ISIS` one-fingered salute while clutching AK-47s which dwarf their small bodies. Many dot the periphery of beheading videos. Cub “graduation” ceremonies feature boys of 10 or 12 fidgeting with ski masks, holding hands with other pint-sized jihadis who can’t be more than six or seven.

Parents are not forced to send their children to the camps, one ISIS fighter in Raqqa told NBC News.

Abu Dujana boasted of “many training camps” and said there is “almost a cub camp in every region” under ISIS control where children from Syria — and nations like Germany, France and the U.K. — are taught “intensive sports” along with the tenets of Shariah law, how to use light weapons, manufacture explosives and attack.

“They have to get used to hearing the sounds of explosions and machine guns and missiles and artillery and aircraft,” he explained. “They should used to get to seeing blood.”

Abu Dujana said he’d observed a “clear change” in the personality and behavior of cubs after “camp” has concluded — they leave with "much lesser" fear of battle.

Once camp is over, “cubs are selected” according to their physical ability and if they are in “good condition” they are taken to the battlefield, Abu Dujana said. He told NBC News that some who were aged around 15 had insisted on accompanying fighters to the Syrian city of Kobani.

“The goal of these camps is not to take the cubs to the battles, but to prepare them for the battles in the future,” Abu Dujana explained. “If some of them are taken to the battles, they stand in the back rows in order to see how to fight and hear the explosions and to see the wounded and the dead.”

He explained that ISIS’ focus must be on kids because “this war will continue for a long time” — and the cubs of today must be ready to one day fight as the adults of ISIS.

“We should start train them from now because they will complete what we started: the expansion of the Islamic caliphate,” Abu Dujana said.

Enlisting or conscripting children under the age of 15 — even for military support roles — is a war crime under international humanitarian and human rights law.

But ISIS has “aggressively targeted” children for recruitment and use in military operations, including suicide bombing missions, according to a Human Rights Watch report which said armed groups are using boys as young as 15 as fighters and kids as young as 14 in support roles.

“Some children who participated were detained or killed in battle,” the report said, citing interviews with young boys who had “fought on the frontlines, spied on hostile forces, acted as snipers, treated the wounded on battlefields, and ferried ammunition” to fighters as battles raged.

“When ISIS came to my town…I liked what they are wearing, they were like one herd. They had a lot of weapons. So I spoke to them, and decided to go," one teen told HRW of how he ended up in a training camp in Aleppo at 16. "The leader of the camp said [ISIS] liked the younger ones better.”

The U.N. also has confirmed reports of children as young as 12 or 13 undergoing military training organized by ISIS in Mosul and later accompanying ISIS patrols there and in Tal Afar. It added that some boys who had been forcibly recruited and managed to escape told their families how they`d forced to "form the front line" to shield older fighters and to donate blood to treat older and injured fighters.

ISIS offered financial rewards to recruit children for the same training undergone by adults, according to a separate U.N. report which said the militants had recruited children from the age of 10 in the ISIS stronghold of Raqqa, Syria.

The U.N. said it appears that ISIS “systematically” provides weapons training to children, who subsequently are “deployed in active combat during military operations, including suicide-bombing missions.”

“In the recruitment and use of children under 18, ISIS has violated international humanitarian and human rights law,” the report found. “In using children below the age of 15, the group has committed a war crime.”

One recent graduation cub ceremony sent around 50 newly trained and armed mini-jihadis under the age of 15 onto the streets of Raqqa, according to an eyewitness who spoke to NBC News on condition of anonymity.

“After the graduation I saw them roaming the streets in a show of power parade,” he recalled. “I saw one child carrying a rifle with a wooden butt, it was taller than him,” the eyewitness said. “I asked him, `Who is taller, you or the rifle?` He shouted back at me: `Are you making fun of me?` "

Since that day, he said, other groups of children have been trained, graduated and gone on to fight in pitched battles in Raqqa. Small soldiers roam the streets of the city “as they please,” he added, many wearing masks and hoisting their heavy weapons.

“It is a normal sight to see a child walking alone with an AK-47,” he told NBC News. “It has become a normal sight, but it does eat at my soul what we have deteriorated to. But there is nothing we can do.”