US and China: The great game is on 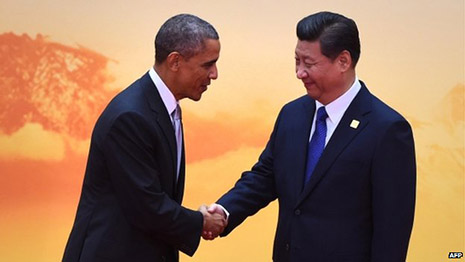 Fireworks and a rolling red road, President Obama in a Mao suit, China pushing economic and security institutions that bypass the regional order underwritten by the United States. The overwhelming impression from this Apec summit is that President Xi is giving his "China Dream" symbols and substance, and that the great game is on between existing and would-be superpower.

The last big American game in town before President Obama was the Brooklyn Nets against the Sacramento Kings.

American NBA basketball is huge in Beijing. For sheer entertainment and energy, it`s hard to match.

So what does this rapt audience like about America?

"The music, the movies, Hollywood, the sport, the food."

The Brooklyn Nets played against the Sacramento Kings in Beijing in October
Thirty-five years ago, China restored diplomatic relations with the United States, part of its journey from isolation to rejoin the global economy.

Washington believed that after decades of exposure to the American dream, China would buy into its values - including the bit about freedom of speech and democracy.

But so far China`s taken the sport, and the entertainment, and it`s left the rest.

Gathering momentum
On a Sunday afternoon above a tea emporium in west Beijing, seven-year-old girls in brightly-coloured silks are plucking ancient Chinese zithers. Many in the audience are also in traditional dress.

The Han Dress Association meets weekly to preserve a heritage which its members believe is richer than anything Hollywood has to offer.

Resplendent in his embroidered red robe, Liu Baokun says such groups are gathering momentum across the country.

"The world is developing extremely quickly and the (Chinese Communist) Party is talking about building a harmonious society," he said.

"Chinese culture is thousands of years old, passed down from the ancestors and still central to our lives. Promoting this culture is a goal for the party and it`s a goal we Chinese people understand and share."

An afternoon of Tang dynasty poetry and song reminding the audience of China`s 8th Century golden age is very much in harmony with the message from the top.

President Xi`s slogan is the great rejuvenation of the Chinese nation, and that includes culture and political traditions, poetry and paternalism.

"We dream the Chinese dream now. Before, everybody dreamed the American dream. The US is a country built on American exceptionalism, the idea that Americans are God`s chosen people, second to none.

"But now, sorry, you Americans are second to China. Can the US accept this? Can it reshape its identity and sense of superiority?"

Much in common
At China`s Apec summit, President Obama showed that he was prepared to try on the clothes.

It`s Apec tradition to wear the national costume of the host country, and President Obama wore his high collar silk Mao suit with good grace, and seemed to enjoy the fireworks and the predictably epic performance of dance and drumming.
The fact is that China and the United States have a lot in common. They are both countries which believe in their own special destiny and which see their culture as an exceptional gift to humanity.

Both are huge continental powers, one which leads the world now and the other which has done so in the past and expects to do so again.

Of course there are as many differences as similarities. The US is a young quarrelsome democracy, China an ancient bureaucratic state.

As the Apec summit ends and the US-China summit begins, the question haunting both events in Beijing: which giant is more resilient for the challenges of the 21st Century?