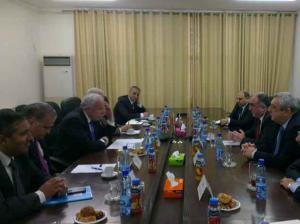 The sides reached an agreement on the improvement of the relations in various spheres and underlined great potential for the development of the relations.
Palestine’s Foreign Minister noted that Azerbaijan has a great influence at the international organizations, especially at the UN Security Council, Organization of Islamic Cooperation and Nonaligned Movement, and expressed his gratitude to Azerbaijan for supporting Palestine.

‘Azerbaijan supports peace in the region. Our country will continue supporting Palestine’ noted the minister.

Minister underlined that Azerbaijan supports the principle of two states.

Mammadyarov noted that Palestine has the right to become a full member of the international community. He said that he would continue supporting the Palestinians at the international organizations.
Speaking on Karabakh conflict, the minister said that would restore its territorial integrity sooner or later.