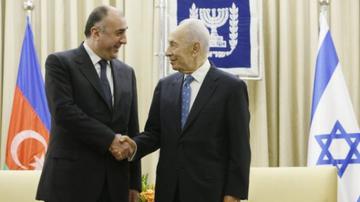 The president of Israel Shimon Peres has praised Azerbaijan for playing a key role in countering Iran`s influence in the Middle East.

Peres stressed that the oil-rich country neighbouring with Iran, has taken a “clear stand” against war and terrorism.
Peres stressed Azerbaijan`s “unique geographic location” makes it a “key country” in the region. Israel, Azerbaijan relationships seems to getting deeper as for the first time in history an Azerbaijani foreign minister visited Israel. The remarks by Peres came after the end of his meeting with the foreign minister of Azerbaijan Elmar Mammadyarov. According to Associated Press, Israel`s ties with Azerbaijan have grown since its once-strong strategic relationship with nearby Turkey deteriorated, New Europe wrote.

However, according to BBC the two countries have had diplomatic relations since April 1992, six months after the former communist state declared its independence from the Soviet Union. According to a 2012 article by the British news agency, Israel, Azerbaijan shares the same goal: “to check the spread of political Islam in general and Iran in particular.”

Michael Lotem, Israel`s Ambassador to Azerbaijan told BBC on August 2012, “we share the same view of the world, I guess. We share quite a few common problems. For us Israelis to find a Muslim country which is so open, so friendly, so progressive, is not something the Israelis take for granted.”

The driving force behind Azerbaijan`s high economic growth during 2006-10 was its large and growing oil and gas exports.