Georgian president calls for unity in fighting for country 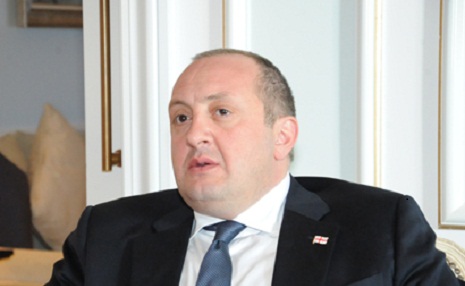 Georgian President Giorgi Margvelashvili is starting consultations with the representatives of non-parliamentary opposition and non-governmental sector to achieve a unity around the idea of preserving the country
“We need to analyze and start discussion of the problem of the country’s territorial integrity with the representatives of political parties, the public and refugees,” Margvelashvili said speaking at an emergency briefing Nov. 24. “We must develop new ways out of this situation.”

Margvelashvili also appealed to the Catholicos-Patriarch of All Georgia Ilia II, as well as the representatives of all religious denominations to actively engage in the solution of this problem.

“I would like to appeal to the Primate of the Georgian Orthodox Church and representatives of all religious denominations in Georgia asking them to use all available resources at their disposal to prevent the assimilation of a small nation,” President Margvelashvili said.

“We must unite in order to address this issue, and I am sure that we have the resources to deal with this difficult situation,” the president added.

On Nov. 24, the Russian President Vladimir Putin and the de-facto president of Abkhazia, Raul Khajimba signed in Sochi an agreement on strategic alliance and strategic partnership.

Large scale military action was launched between Georgia and Russia in South Ossetia on August 8, 2008.

Russia recognized the independence of South Ossetia and Abkhazia in late August.

In response, Tbilisi ended diplomatic relations with Moscow and has called the two unrecognized republics of Abkhazia and South Ossetia occupied territories.