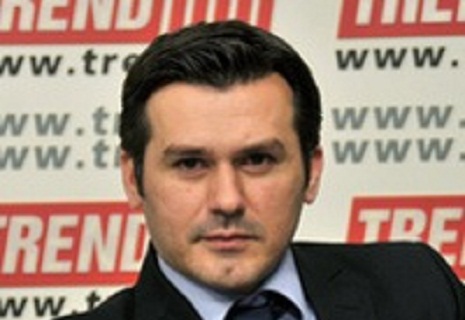 Ankara held a conference entitled "Sealed door: the future of Turkish-Armenian border" on November 22-23 organized by the Ankara University, Faculty of Political Science and the Hrant Dink Foundation
The Armenians expected that the conference, held on the eve of the centenary of the so-called genocide, will be "a ray of light in the Armenian-Turkish relations".

Such an event is normal for Turkey, where everyone has the opportunity to freely express their thoughts. And yet, the conference was perceived ambiguously by the Turkish society.

In particular, Turkish Deputy Secretary General of the National Action Party Abbas Bozyel assessed holding the conference as "a step aimed at the destruction of the history of the Turkish nation".

Bozyel told Trend that is it impossible for Turkey to conduct a dialogue with Armenia which regards the country’s eastern provinces as its own lands, has enshrined this in its constitution and has occupied the territories of the brotherly Azerbaijan.

“Although such events are held in Turkey, the country’s policy and the position of Turkish people with respect to Armenia will remain unchanged,” said Bozyel.

Turkish officials also stated that the normalization of relations between Turkey and Armenia is impossible without taking into account Azerbaijan’s interests.

Deputy Prime Minister of Turkey Yalcin Agdogan and board member of the ruling Justice and Development Party (JDP), Mazhar Bagly told Trend that it is necessary to take into account the interests of Azerbaijan in the issue of restoration of relations between Ankara and Yerevan and the opening of Turkish-Armenian border is impossible without the settlement of the Nagorno-Karabakh conflict.

Furthermore, the Nagorno-Karabakh problem is as important for Turkey as it is for Azerbaijan. This problem indirectly affects the national interests of Ankara as well.

Despite the serious efforts of pro-Armenian forces in Turkey and the Armenian leadership, restoration of Turkish-Armenian relations without the settlement of the Nagorno-Karabakh conflict is impossible. No matter who is in power in Turkey, such a move would at least be a political suicide.

Aside from that, it is also necessary to take into account energy projects that are jointly realized by Turkey and Azerbaijan. It is hard to believe that Ankara will barter these projects for improvement of relations with Armenia, who lives in a crisis.

Today, there is a lot of talking about a possible normalization of relations between Turkey and Armenia, and certain steps are taken in this direction.

But unless the Nagorno-Karabakh conflict is settled, and unless the Armenian leadership gives up its territorial claims and ideas of the fictional “genocide”, the relations between Turkey and Armenia will be nothing but a door to nowhere.