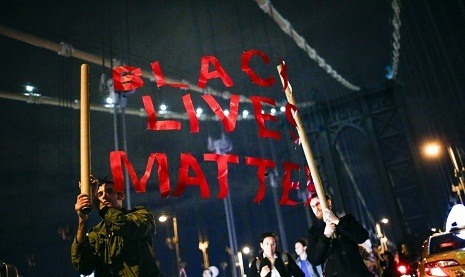 Thousands of protesters marched through the streets of New York City for the second night on Tuesday, chanting loudly and blocking traffic on some of Manhattan
The police said that some protesters had been arrested, though no figures were immediately available.

The protesters marched on Franklin D. Roosevelt Drive, through Times Square and across the Manhattan Bridge, disrupting traffic along those routes and at the Lincoln Tunnel.

One group of protesters tried to cross the Williamsburg Bridge to Brooklyn, but a wall of police stopped them, even as they tried to pull down a police barricade.

Another group of protesters marched from Union Square through the East Village and hopped a barricade onto F.D.R. Drive. Officers standing nearby blocked car traffic as the protesters walked in the street.

The protesters, a diverse and relatively young crowd, held signs saying, “Hands up, don’t shoot,” and “Black Lives Matter.” Around 9 p.m., they began to enter the roadway on the Manhattan Bridge, chanting, “Whose bridge? Our bridge,” and then crossed into Brooklyn.

One protester, Fernando Reals, 37, of the Bronx, carried his 1 ½-year-old son on his shoulder. He said he had also marched during protests over the 2012 death of Trayvon Martin in Florida. “We have to take to the streets to protect our children,” he said as he marched near Union Square.

There were rallies on Tuesday in dozens of cities, including in Ferguson, Washington and Los Angeles. They were in response to a grand jury decision on Monday not to indict Officer Darren Wilson in the shooting death of Michael Brown, 18, in Ferguson in August. In Chicago, protesters had a sit-in outside the mayor’s office, and in Cleveland a crowd blocked a major intersection.

In Times Square, a separate group of hundreds of protesters marched peacefully, with their hands in the air, as the police stood nearby. Around 8 p.m., an officer announced that arrests would be made if people did not clear the roadway. After a second announcement, officers in helmets pushed into the crowd and began to make arrests.

A protester, Gwen Taylor, 34, of the Bronx, said: “I’m here because I don’t understand why the police always have their guns out. I’m tired of police killings.”

In Brooklyn, helicopters hovered above as hundreds of protesters walked through the streets of Prospect Heights. At the head of the march, Taylor Bates, 23, from Seattle, said, “This is for Mike Brown, and all the other people that got killed from these thug cops. No justice, no peace. We are going to shut the city down.”

At the Lincoln Tunnel, the center tube was closed to the public for about an hour and a half on earlier Tuesday evening and used just for emergency vehicles as a precaution, the Port Authority of New York and New Jersey reported. Because of the protests near the tunnel, delays were reported for cars and buses coming and going from the Port Authority Bus Terminal, according to New Jersey Transit.

One driver, Kahlil Bess, 41, of Harlem, who was stuck in his car on the Manhattan Bridge, honked his horn to the rhythm of the crowd, which was chanting, “Hands up, don’t shoot.”

“I’m a black man,” he said. “I have two black children, and enough is enough.” Asked if he did not mind sitting in traffic, he said, “I didn’t say that, but I understand injustice is never convenient.”