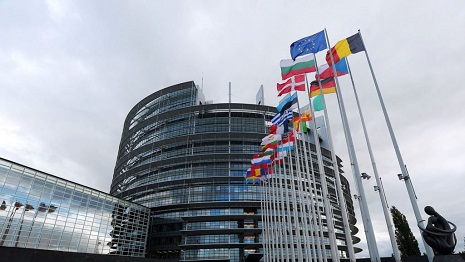 European Parliament MEPs discussed on Wednesday the impact recognizing an independent state of Palestine would have on the Israel-Palestine peace process, as well as the wider region, Anadolu agency reported.
There was due to be a debate and vote on the same matter on Thursday Nov. 27, but there were disagreements over the wording of the motion.

This means that MEPs will vote on a resolution on the matter -- proposed by the left-wing European United Left and Socialists and Democrats parliamentary groups -- during the Dec. 18 plenary, according to a European Parliament press release.

The motion is expected to eventually pass, despite Israeli efforts.

“The recognition of the state and even the negotiations are not goals in themselves. The goal in itself is having a Palestinian state in place and having Israel living next to it,” Mogherini added.

The president of the Socialists and Democrats parliamentary group, Gianni Pittella, called on all EU member states to recognize the State of Palestine, underlining that this is absolutely in line with the decision taken by the United Nations General Assembly on 29 Nov. 2012.

Ahead of the debate, Martina Anderson, chair of the delegation for relations with the Palestinian Legislative Council, said that the European Parliament could recognize the State of Palestine "which would provide an impetus for meaningful talks towards a two-state solution."

For Fulvio Martusciello, chair of the delegation for relations with Israel, "The European Parliament must condemn loudly and unanimously every episode of violence and do everything necessary to reverse the downward and surging spiral of violence."

Europe has been swept lately by a wave of support for Palestinian statehood, as the peace process remains deadlocked.

The U.K. and Spanish parliaments as well as the Irish senate have also all delivered non-binding endorsements, reflecting growing frustrations with the sputtering Israel-Palestine peace process.

On Nov. 28, France’s parliament will hold a symbolic recognition vote and Denmark’s lawmakers will debate a similar motion in December.