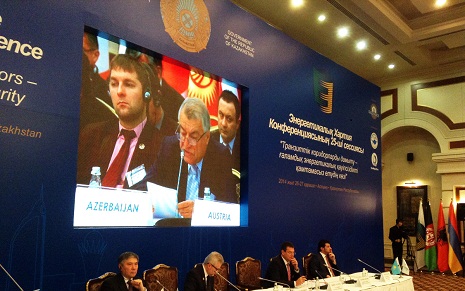 The Southern Gas Corridor is the strategic project that plays an important role in the economic development of such a large region as South-East Europe, Azerbaijani Energy Minister Natig Aliyev said on Nov.27.
The minister made the remarks while speaking at the 25th session of the Energy Charter Conference in Astana, Kazakhstan.

The Southern Gas Corridor will allow Europe to diversify its hydrocarbon supply sources and strengthen energy security and also will allow Azerbaijan to obtain a new market in Europe.

“The success of the Southern Gas Corridor gives us opportunity to continue the political and economic cooperation in the energy security not only with the countries of the Caspian Sea and Black Sea regions, but also with the Mediterranean Sea states,” he said.

The energy minister added that alongside ensuring its energy security, Azerbaijan also supplies electricity to the neighboring countries in the region and participates in the construction of a power transmission line jointly with Iran and Georgia.

Aliyev said Azerbaijan plans to start electricity export to Turkey, adding that the start of electricity supply to Georgia and Turkey fully meets Azerbaijan’s intention to create a framework for the energy cooperation in the region.

The energy minister added that the work is underway in Azerbaijan on the use of renewable energy sources by relying on traditional energy sources.

“This is also an important vector that will allow us to reduce the environmental burden and ensure the energy security in the future,” the minister said.

Aliyev said many partners of Azerbaijan, especially those in the Caspian Sea region emphasize the importance of the settlement of Armenian-Azerbaijani Nagorno-Karabakh conflict in accordance with the OSCE principles envisaging the sovereignty and territorial integrity of any state.

Kazakhstan’s Deputy Energy Minister Uzakbai Karabalin for his part said that Azerbaijan plays an important role in ensuring the mutually beneficial cooperation and in the development of transit corridors in the Caspian Sea region.

On December 17, 2013, a final investment decision was made on the Stage 2 of the Shah Deniz offshore gas and condensate field`s development. The gas produced at this field will first go to the European market (10 billion cubic meters). Around six billion cubic meters will be annually supplied to Turkey.

The gas to be produced as part of the Stage 2 of the field`s development will be exported to Turkey and to the European markets by means of expanding the South Caucasus Pipeline and construction of the Trans-Anatolian Gas Pipeline (TANAP) and the Trans-Adriatic Pipeline (TAP).