French embassy in Libya hit by `car bomb` in Tripoli 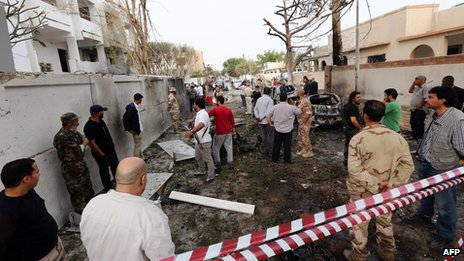 The blast completely destroyed the embassy`s reception area and parts of neighbouring homes, the BBC`s Rana Jawad reports from the scene.

It is thought the blast was caused by a booby-trapped car, she says.

He said the attack had targeted "all countries in the international community engaged in the fight against terrorism".

Diplomatic missions in Libya have been attacked in the past, but this is the first major attack on a foreign embassy in the capital.


An attack on the US consulate in the eastern city of Benghazi by armed men in September 2012 led to the killing of Ambassador Christopher Stevens and three other American officials.

The blast took place in a small side street and left a scene of devastation.

As well as extensive damage to the embassy`s building and perimeter wall, two nearby homes were badly damaged, the windows of a shop were blown out and two parked cars were burnt out.

Many neighbours who gathered in the street to survey the damage were shaken and upset by what had happened, our correspondent reports.

They told her that there was a lack of proper policing for such a potentially high-profile target.

"It was a big mistake to site the French embassy in our neighbourhood," a local resident said.

Libyan Foreign Minister Mohammed Abdel Aziz condemned the bombing as a "terrorist act", but did not speculate on who might be behind it.

His French counterpart Laurent Fabius - who is reportedly travelling to Libya - said French officials would work closely with the Libyan authorities to find out who was responsible for what he called an "odious act".

No group has yet claimed responsibility for the attack.

French embassies across northern Africa have been on high alert since France sent in troops to help fight an Islamist insurgency in Mali in January.