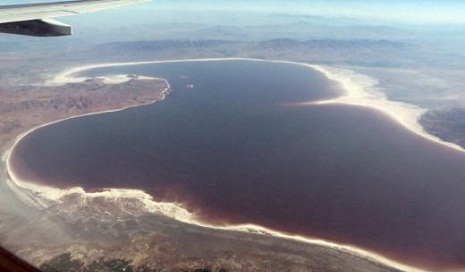 Iran has been struggling for the shoaling problem of the biggest lake in the country for several years
The government has been working on various measures to revive the lake with launching different projects, but the efforts haven’t borne the desired results.

The Iranian government continues to take measures on tackling the shoaling problem of the Lake Urmia that is experiencing its worst drought condition for many years.

Ghorban Ali Saadat, the Head of the Iranian province of West Azerbaijan has recently said Iran has prepared a package of proposals to restore the Lake Urmia.

“According to these proposals, the lake can be brought back to the condition of 10 years ago. The package of the proposals has been prepared by scholars from several countries,” Saadat said on November 25 at a meeting with Azerbaijani journalists on a visit to Iran.

The area of Lake Urmia is the third largest salt water lake on earth, which has 6,000 square kilometers surface. During the migrations of birds, the lake becomes their temporary home. Over 70 percent of Lake Urmia`s water has dried up. The level of water has been declining since 1995.

The lake`s drying up has an impact on the flora and fauna of the region. Experts on environmental issues say that the measures taken by the Iranian government are not enough to save the lake.

Saadat said the scholars from Russia, Canada, Japan, the U.S. and European countries, who carried out the necessary research for restoring of the shoaling Aral Sea, were invited to Iran. There have been several meetings attended by them on the issue.

“Their proposals were considered and studied, and afterwards a package of proposals was prepared in six months in accordance with the recommendations,” he said, adding that the package consists of 25 proposals, each of which includes certain paragraphs.

The Iranian government has allocated a huge amount of money to solve the problem.

Earlier, KioumarsDaneshjou, Head of the Water Resources Department of West Azerbaijan Province said the administration allocated 3.7 billion rials (about $139 million based on official rate of 26,600 rials per $1) to implement projects aimed at revival of Lake Urmia for current fiscal year started on March 21.

The shoaling problem of Lake Urmia is a matter of concern not only for the Iranian government, but also other countries and international organizations of the world.

Lewis warned in his report that the slow death of the Lake Urmia signals a warning for the future.

He further noted that it is necessary to switch from the traditional irrigation system to the efficient one.

“There are small ponds and reservoirs near the Lake Urmia, and we are trying to direct their waters into the lake. This will also help its recovery,” Saadat added.

Touching upon the possibility of implementing the project for transferring water from the Caspian Sea and Araz River to Lake Urmia, he noted that first it is necessary to define the chemical composition of these waters more exactly.

“The waters of the Caspian Sea have a high content of sulfates, while there is much sodium chloride in the waters of Lake Urmia and their interflow can create even more problems,” Saadat said.

An investment agreement worth around 875 million Euro for the transition of Araz River’s waters to the Lake Urmia was signed in Iran in July 2013.

Under this project, Iran plans to resolve the water shortage problem in eight cities and 81 villages.