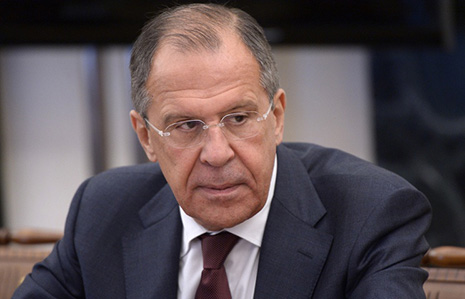 The Foreign Ministry’s spokesman, Alexander Lukashevich, said Moscow expects that “the talks will help promote interaction with the Council of Europe in the directions that are priority for Russia and will enhance the place and role of the organisation in the European architecture.”

“We are set to confirm out principled vision of the Council of Europe as a humanitarian and legal basis for equal and indivisible security for all European countries without exception,” he said adding that “it will justify the common goal of creating a united space of humanitarian and economic co-operation from the Atlantic to Pacific.”

Lukashevich said that Jagland’s visit “provides a good opportunity for discussing additional measures that the CE agencies should adopt to achieve the soonest peaceful and inclusive settlement of Ukraine’s crisis on the basis of priority of human rights and principles of rule of law.”

On Tuesday Jagland said that Kiev’s plans to build a wall on the border with Russia were unacceptable as it was destroying the fates of people and their families and that an idea of a common European home should be stepped up.

The International Advisory Panel /IAP/ set up on Jagland’s initiative is expected to collect by November 30 all the facts related to the investigations into Maidan clashes in Kiev last winter and tragic events in Odessa on May 2 so that to oversee that these probes meet all the requirements of international law.

The IAP assessment report should be complete by the beginning of 2015 on the events in the Ukrainian capital and later the Panel will get down to the Odessa tragedy.
Jaglad arrived in Moscow amid disagreements between the Parliamentary Assembly of the Council of Europe /PACE/ and the Russian delegation.

In April the PACE deprived the Russian delegation of the right to vote at the Assembly sessions over Russia`s reunification with Crimea and dismissed the delegation from all the governing bodies of the assembly.

The PACE passed a resolution on Ukraine which laid all the blame for the crisis in that country on Russia.

The document, adopted based on PACE rapporteurs` report, says that Russia`s actions with regard to Crimea are a clear violation of international law and claims that the far-right forces did not seize central power in Kiev and there was no direct threat to the rights of the ethnic Russian-speaking minority, including in Crimea.
It called the Crimean referendum on reunification with Russia unconstitutional and its results invalid and unrecognised by the Council of Europe.
The Assembly reaffirmed its support for the independence, sovereignty and territorial integrity of Ukraine.

It also spoke against federalisation of Ukraine, recognised the self-proclaimed authorities in Kiev legitimate and demanded that the use of force by the deposed government against protesters be condemned and those responsible for violations of human rights be penalised. The Assembly also called for holding early parliamentary elections in Ukraine.
The Russian delegation voiced strong protest against the resolution. The Russian lawmakers then left the PACE spring session and refused from further work there. Since then the lawmakers have stayed away from Strasbourg, omitting the summer and autumn sessions.

PACE is due to do a formal reaffirmation of all the powers of the delegation in January 2015 but observers in Strasbourg say some European deputies will most likely speak out against it.

In this case, the January session will begin with a special debate and voting on the Russian dossier and all the powers of the delegation will be called into question then.