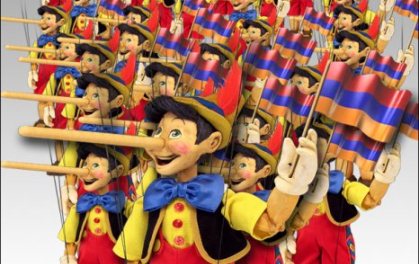 SOME FACTS ABOUT SO-CALLED "ARMENIAN GENOCIDE"
When armenian organizations instigated Armenians to revolt during World War I (1914-1918) against the Ottoman Government, their intention was to exterminate the Turks and to create an independent armenian state in eastern Anatolia where armenians were only about 15% of the total population. Entire population of the region was subjected to violence beyond belief violence which was planned to exterminate the whole Turkish people of the region to the last man, woman and child. Armenian revolters tortured and massacred large numbers of defenseless civilians. To assemble innocent civilians In the mosques and burn them in the building was one of their methods. Even today the traveler in that region is seldom free from the evidence of these armenian crimes. It must be pointed out that there is no historic position foilikening the annihilation of minority groups under Hitler and the Third Reich to the revolt of the Armenians against the Ottoman Government in 1915.

First of all, the Armenians were in armed revolt against the Ottoman Government. The Jews, Wenns and others of Hitler`s Germany ware not.

Secondly, the Allies actually promised the Armenians nothing for their revolt, except some amorphic phrases from the British.

- on the collapse of this government and the supported revolt, the cause was lacklusterly aided by the French, mainly in the region of Cilicia,
- the regime of imperial Russia led and took over the Armenian insurrection,
- that it was singularly unsuccessful is a testament to the vigor of the Turkish people. So, in truth, the position of the Armenians was in vain;

Thirdly, that anyone has to die is regrettable, but history is unfortunately full of examples of similar events, and it is obvious that the responsibles of the innocent Turkish, and Armenian victims of the Armenian revolts are the Leaders of the Armenian Revolutionary Organizations who incited, armenians to revolt against legal Ottoman Government.

The Armenian historians and instigators exciting young people`s minds publish much on the genocide. And with every decade a number of "the murdered" increases in the geometric progression. Manipulation of figures, rough misrepresentation of historical facts - it is a principal weapon of the Armenian falsificators whom as long ago as the beginning of the century unmasked above-mentioned Ilya Chavchavadze in his book "The Armenian scientists and screaming stones".

Just think of the following! The state is having an internecine battle with invaders but at this lime in the rear there have been found people undermining the rear with armed uprising and favoring defeat of the country where they live. Any state is obliged to lake safety measures. The measures arc extreme but forced and justified for the future of their people. History will tell us more about this. But we shall cite the authentic document:
"As it is evident from the recent interference of the american, english, french and russian embassies in Constantinople and in some places the consuls of these embassies in secret receive false information in spite of our answer that the armenians` deportation takes place in complete safety and quietness. It is not enough to persuade them. Take all safety measures and do your best that at the moment when the armenians from cities, districts and centers are on their way the events would not take place about which the foreigners and armenians themselves speak so much. It is very important from the point of view of our present-day policy the foreigners passing through these places to be convinced that the armenians` deportation is really with the aim of transferal. As regards those who give information concerning this question I recommend you to arrest and give them to the council of war."

Armenian disorders in Turkey since 1893 to 1918 and in Azerbaijan (Karabakh, Goycha, Iravan, Nakhichevan, Zangezur) since 1905 up to present is a convincing illustration of one thing - territorial claim there and only there where they have been given shelter. And though I did not want to refer to origins in this part of the book, it would not be extra to refer to well-known Soviet historian, great specialist in Renaissance history and culture, a corresponding member of the Armenian Academy of sciences, author of many books on history of (he so-called "West Armenia" Aicxci Karpovich Dzhivclegov who wrote: "Since 1982 to 1912 Armenian population of Great Armenia left for the neighboring countries, 612 thousand in number."

Armenian nationalists-bandits like Andranik were at the head of these actions. A typical feature was the fact that Armenian fighting men were armed with fire-arms, artillery and grenades but the population defended them selves with pitchforks, spades and cudgels. We should mention that the European countries having violent desire to destroy Turkey still disapproved the policy of gnchakists who had set themselves as an objects to murder the peaceable population and to slab the country in the back which had sheltered them.

Sokolsky writes in "The Essays on Modern Turkey" that the number of Armenians living in Turkey was 1.285.000 in 1915. After the Armenian - Turkish, Armenian - Georgian and Armenian - Azerbaijanian wars unleashed by leaders of "the Gnchak" and "Dashnaktsutyun" on the Turkey territory only about 380.000, survived 600.000 have emigrated to Egypt and Syria, India and Pakistan, England and France, Australia and Indonesia, the USA and Canada, Ethiopia and Mexico, Cyprus, Italy, Rumania and many other countries. The deported part of Armenians lo the inland of Mesopotamia numbered 100.000 of persons. The rest part was killed during the above-mentioned wars. Nothing else is left but to guess how the so-called "genocide" annihilated 2 million of Armenians.

There was not "armenian henocide", but there was and is still on a henocide carried out by Armenian terrorists. After all we just want to quote a passage from the program of Armenian political party "Gnchak": "To kill turks and kurds in any conditions..." (40. page 79).