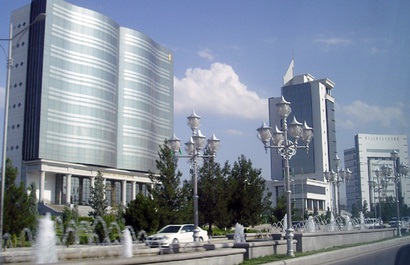 Meeting held at the Ministry of Petroleum and Mineral Resources of Turkmenistan
A regular meeting of the Turkmen-Kazakh intergovernmental commission on economic, scientific, technical and cultural cooperation was held in the capital of Turkmenistan where the signing of a relevant protocol took place, the Turkmen government said on Friday.

The Kazakhstan representative delegation was led by the Minister of Oil and Gas Sayat Mynbayev.

The meeting held at the Ministry of Petroleum and Mineral Resources of Turkmenistan was attended by the heads and leading specialists from a number of ministries and departments, including transportation structures.
The intergovernmental commission is intended to facilitate the practical implementation of those tasks of further development of inter-state cooperation, according to a statement.
The meeting emphasised that `important steps were taken to strengthen the legal framework for bilateral cooperation in such fields as trade, economy and agriculture, as well as the transit and transport sector."

According to the statement, it was noted during the meeting that a large scale project to build the Uzen-Gyzylgaya-Bereket-Etrek-Gorgan railway (Kazakhstan-Turkmenistan-Iran), which is a key part of the North-South transnational transport corridor, is nearing completion. The new main line will serve as an effective bridge between Europe and Asia and give a powerful impetus to further development of mutually beneficial trade and economic relations.
During the meeting, the sides exchanged views on the prospects of fruitful international dialogue in the oil and gas sector.
Kazakhstan and Turkmenistan cooperate on their energy output to foreign markets. Kazakh oil is transported in a southerly direction to the Persian Gulf, whereas Turkmen gas travels northwards to Russia, Ukraine and Europe as well as in China.
A notable development in this area was marked by the launch of the Turkmenistan-Uzbekistan-Kazakhstan-China gas pipeline in December 2009. The pipeline may supply gas to southern regions of Kazakhstan and on the other hand, export Turkmen gas to China.

The commission members also discussed the problem of establishing closer humanitarian ties, especially in the fields of education, science, information and communication technologies.