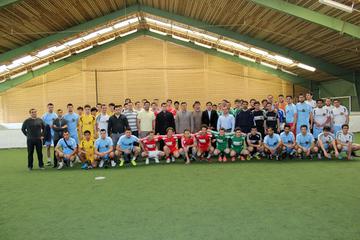 The "Heydar Aliyev Cup" international mini-football tournament organized by the Azerbaijan Academic Union in Vienna, and "OdlarYurdu" Organization has been held in the capital of Austria.
Supported by Azerbaijan`s Embassy in Austria, the tournament was dedicated to the 90th anniversary of national leader Heydar Aliyev, AzerTAc reports.

Various international amateur teams competed in the Vienna qualifications in a bid to book a spot in the “Grand Final” which will be held in Baku on May 5. Georgia won the Vienna tournament.

The Georgian footballers were presented with the Heydar Aliyev cup, gifts and medals.