Formula 1 is undergoing a generational shift this year, with a new crop of drivers staking their claim to be the next set of global stars.
For a decade now, Formula 1 has been dominated by an elite group of drivers - Fernando Alonso, Jenson Button, Lewis Hamilton, Kimi Raikkonen and Sebastian Vettel have between them won every world championship since 2005.

And Nico Rosberg, leading this year`s championship so far, has emerged as part of that group since the start of Mercedes` domination in 2014.

But all those drivers, excluding Sebastian Vettel, are now into their 30s. In most cases, their abilities remain as strong as ever - in the paddock, it remains the widespread belief that Alonso and Hamilton are the best two drivers on the grid.

But at 34 and 31 respectively, even they have less time ahead of them than behind them.

And just as it was clear back in the early 2000s that Alonso and Raikkonen would ultimately supplant the ageing Michael Schumacher, the identity of the next elite bunch is emerging. Four bright young talents have emerged at the head of that group.

To call Ricciardo an emerging star is a bit of a stretch - it would be just as easy to argue that he has already joined the elite group by virtue of his superlative performances since he joined Red Bull`s senior team in 2014.

Back then, he was the easy-going Aussie with a smile as wide as the outback and as bright as an Antipodean summer`s day who was expected to be the next whipping boy for Vettel.

How wrong that turned out to be.

From the beginning of that season, Ricciardo showed his four-time world champion a clean pair of heels more often than not.

His combination of blistering pace and willingness to try overtaking moves that others would not dare brave led to three stunning and opportunistic victories that year - and many more starring performances. 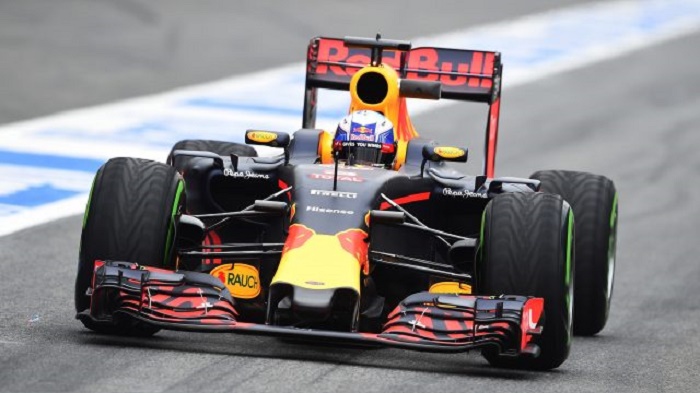 Vettel, seeing the writing on the wall, left for Ferrari. Ricciardo`s reward was a new contract with Red Bull with vastly increased pay, locking him to the team until the end of 2018, with no escape clauses.

Ricciardo`s momentum stalled in 2015, when the Red Bull car was not to his liking and he did not adapt well - and this remains the only small question mark over his ultimate ability compared with the likes of Hamilton and Alonso.

But once the car was improved from last summer on, he found his mojo again, prompting team boss Christian Horner to say at the Spanish Grand Prix last weekend: "The way Daniel is driving at the moment, I don`t believe there is a better driver in F1."

Ricciardo is great company, with his constant smile, an ease with the media and a ready joke. And he is a driver the other big teams, Mercedes and Ferrari, are very much keeping an eye on.

With Red Bull`s form on the up again, the only potential cloud on the 26-year-old`s horizon is the identity of his new team-mate. 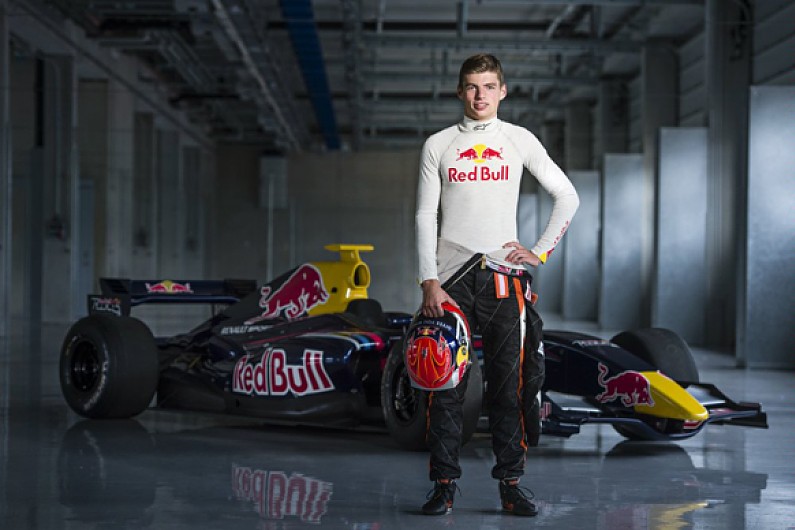 Max Verstappen`s stunning debut victory for Red Bull in Spain last weekend came just 14 months after he made his F1 bow for junior team Toro Rosso amid claims that he was far too young to be given the chance.

But the performances since produced by the Dutchman - now 18 - have proved how wrong those doubters were. This is a very special talent.

The son of former F1 driver Jos Verstappen, Max has been groomed to be an F1 driver since he was three years old.

His debut season last year was hugely impressive, especially for the series of improvisational overtaking moves that displayed a rare feel for the limits of the car under the extremes of braking and corner entry.

However outlandish a move seemed, from however far back it was launched, there were no locked wheels, no sliding wide; just beautiful, elegant passes. And remarkably few rookie mistakes.

When Verstappen was promoted to the Red Bull senior team after just four races this season, there were again people questioning the move. Again, they were wrong.

Close to the pace of team-mate Ricciardo from the off in Spain last weekend, he threatened for much of Saturday to out-qualify him.

Even though Ricciardo ended up 0.4secs ahead, Verstappen`s performance was still mightily impressive for someone in his first race in a new car and new team against a driver of that calibre. 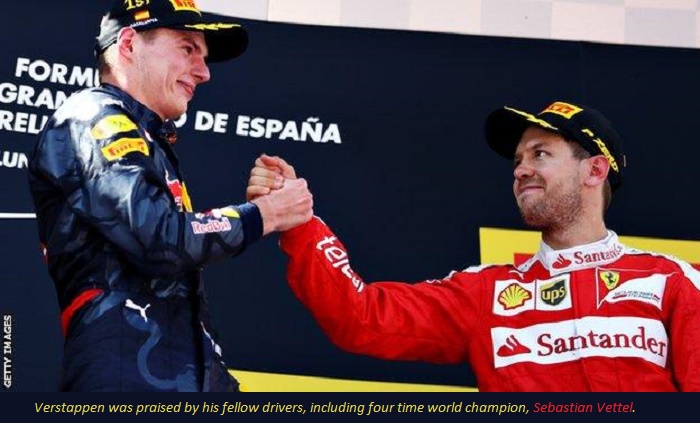 But it was nothing compared to what he did in the race. When Red Bull chose - incorrectly in hindsight - to switch Ricciardo to a three-stop strategy to defend against Ferrari, Verstappen found himself in the lead.

He did not put a wheel wrong for the rest of the race, despite the presence of Raikkonen`s Ferrari close behind, and took a stunning victory.

His new contract with Red Bull - negotiated as part of his promotion - commits him to the team until 2019, a year longer than Ricciardo.

Horner says the prospect of the two team-mates is "fantastically exciting for us".

Their battle will be fascinating - as will seeing whether there remains room in the same team for two such strong talents.

Kevin Magnussen has been given a second shot at F1 with Renault this season but in many ways the surprise is that his career came so close to being over last winter. 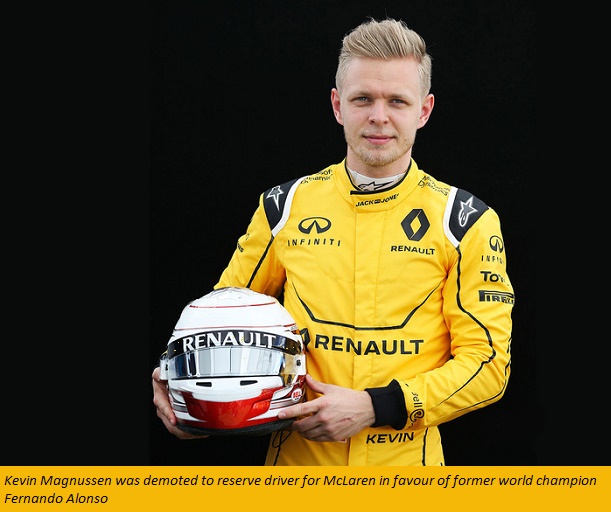 The Dane, still just 23, finished on the podium in his debut race for McLaren in 2014 and matched up well against Jenson Button for the rest of his rookie year.

So well, in fact, that chairman Ron Dennis had decided to keep Magnussen rather than Button as Alonso`s team-mate in 2015 - only for boardroom politics to intervene and the 2009 world champion to get the nod.

Magnussen was kept on as reserve driver but, with the promising Stoffel Vandoorne (more on him in a moment) also on the books, there was no room for him at the end of the season and he was let go.

That looked to be that - until Pastor Maldonado`s Venezuelan oil money ran out and a seat opened up at a relieved Renault, who grabbed Magnussen with both hands.

Only five races into the season, Renault trackside operations director Alan Permane - who has worked with, among others, Schumacher and Alonso - says he is "very impressed" by Magnussen.

He is "quick, intelligent and fully engaged". In other words, a proper top-line driver, who so far has by and large comfortably shaded team-mate Jolyon Palmer - a difficult race in Spain, caused by a steering problem, notwithstanding.

Stoffel Vandoorne - waiting for his ride

It might seem odd to pick a driver who does not yet have a race seat as a future star of F1, but that is how good many people believe Stoffel Vandoorne to be. 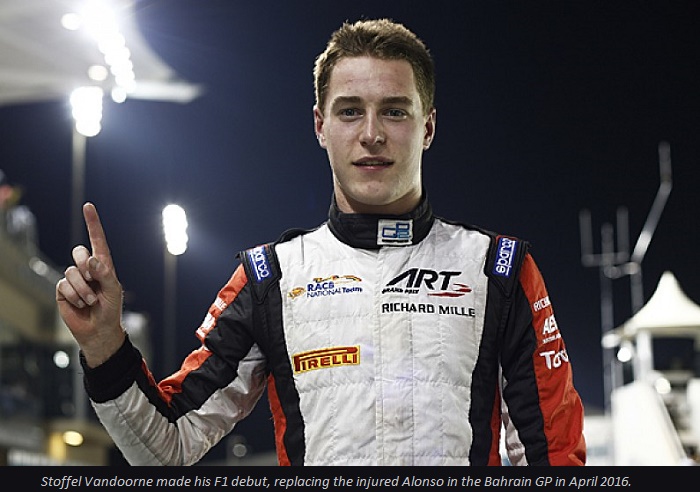 The Belgian, 24, is by far the most highly regarded driver not to have a current race seat but his potential goes way beyond that, as proved by his stellar debut in Bahrain.

Standing in at the last minute for an injured Alonso, Vandoorne flew overnight from Japan to arrive at the track a few hours before first practice.

Just over 24 hours later, he had out-qualified Button in a car he had never driven before that weekend.

That performance strengthened Vandoorne`s already strong case for a promotion to a race seat at McLaren alongside Alonso in 2017.

But it is an agonising choice for McLaren, and one they are not yet near making. Against Vandoorne`s potential and youth are weighed Button`s proven ability, experience and appeal to the sponsors.

If there is no room at McLaren, though, it seems likely Vandoorne will be in a race seat next year anyway. Renault are very keen - their racing director Frederic Vasseur ran him in Formula Renault 3.5 and GP2 and believes he is the best driver he has ever worked with.