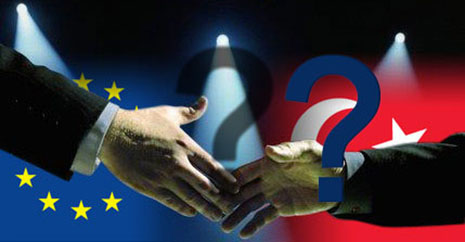 Turkey will never be a member of the European Union", Russian Prime Minister Dmitry Medvedev Medvedev said in an article published by Nezavisimaya Gazeta on Monday, Russia Beyond The Headlines reports.

"The European Union is in no haste to invite Ukraine to the European table as an equal partner. It is not even offered a side chair”, Medvedev said.

Medvedev recalled Turkey, which signed an association deal with the European Union 51 years ago but had yet to be admitted to the EU. "This situation has become an object of ridicule. When Viktor Chernomyrdin was asked when Ukraine might become an EU member, he said that would happen after Turkey did so. "And when would Turkey join the organization? Never," the Russian premier recalled.

When Kiev was pushed toward association with the EU during the presidency of Viktor Yanukovych, senior officials of the European Union ignored the proposal of Moscow, the biggest trade and economic partner of Ukraine, to discuss problems in a trilateral format and offered Moscow "to step aside and wait," Medvedev said.

"We cannot help but wonder what would have happened if Europe had deigned to the joint discussion which was absolutely natural and necessary. Many tragedies could have been avoided. A civil war in eastern Ukraine would not have started," the premier said.

“Kiev wants to come back to the 1990s. The country has embarked on bankruptcy because of debts. 2014 was as a tragedy in Ukraine’s history”, Medvedev said.