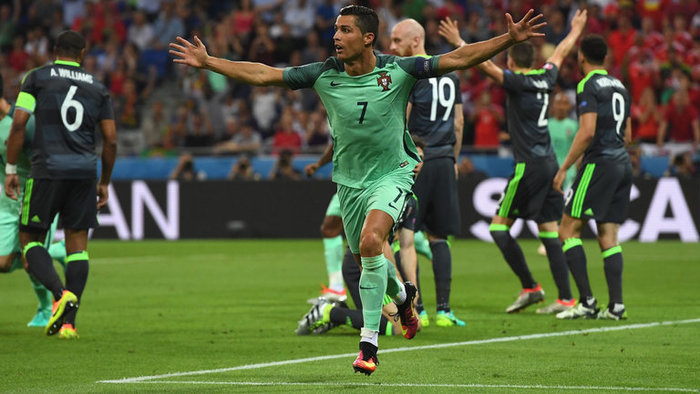 Portugal captain Cristiano Ronaldo is hoping to cry tears of joy at Sunday`s Euro 2016 final after his goal inspired his team to a 2-0 semi-final win over Wales.

The Real Madrid forward scored a brilliant 50th-minute header in Lyon on Wednesday and then teed Nani up for a quick-fire second goal as Portugal booked a final showdown with either Germany or France at the Stade de France on Sunday.

Portugal last reached the final of a major tournament in Euro 2004 and Ronaldo was left crying on the pitch as his side lost 1-0 to Greece on home soil.

"The team did a marvellous job to reach the final," Ronaldo said. "It`s what we have dreamt of since the beginning.

"We knew it would be a long road and we`re still in the tournament. I hope on Sunday you`ll see me crying with joy.

"I always said I wanted to win something with Portugal. We`re closer to doing it and I believe that we`ll win.

"I`ve been at the highest level for 13 years. The statistics never lie."

He now trails tournament top scorer Antoine Griezmann of France by one goal and now has the chance to finally land Portugal`s first ever major trophy having missed out in 2004.

"This is different...that was my first final, my debut, now 12 years have gone by and we are going to play another final.

"I have always dreamed of winning for Portugal. I hope it is our time now.

"I am very confident. I deserve it, Portugal deserves it, all the Portuguese people deserve it."

He added: "I`ve always dreamt of winning something for Portugal and now it`s just one step away. Dreaming is free so let`s keep dreaming."

Meanwhile, Nani hailed what he called a "historic" night for Portugal as Fernando Santos` side reached the final.

"We worked very hard and now we have a final to play," the former Manchester United winger said.

"I feel so proud. I can`t explain the emotions that have overcome me. We are going to live the moment which is historic for the country.

"I scored the goal through instinct," he added. "I couldn`t even prepare the way in which I wanted to celebrate the goal but I want to dedicate it to my family who were in the stands."

Portugal must now wait to see who wins Thursday`s second semi-final between France and Germany but Nani said he had no preference for the opponent in the final: "We have to concentrate only on ourselves and just do our best."

Ronaldo embraced Wales star Gareth Bale at the end of their semi-final but stayed tight-lipped about what the Real Madrid team-mates said.

The world`s most expensive players have often been perceived to be rivals as much as club colleagues, but the respect was clear in their post-match exchange.

"I can`t tell you what went on," Ronaldo said, "I congratulated them on their run, they had an amazing run. They were the shining star here, the revelation team.

"I wished them good luck and as for the rest I would rather not say."