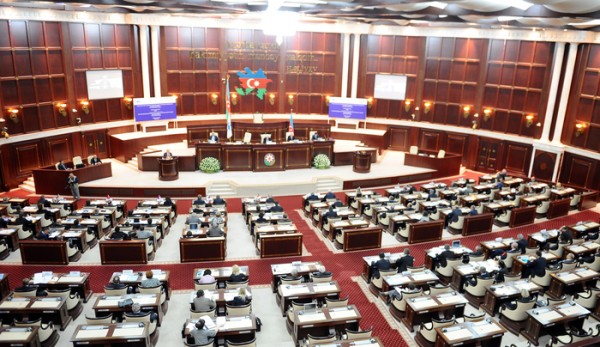 An amendment to the law “On mass media outlets” was discussed at the Azerbaijani Parliament’s meeting Dec. 16.

The term “similar name” (basic concepts) is added to provision 3 of the law and its classification is given; “Similar name – the names which differ from the name of a previously recorded publication with its translation by the founder into another language or only the alteration of the words in the name or those which are the same as the publication’s name despite the addition of a symbol or a word indicating it”. The purpose of the addition is to prohibit the creation of new mass media outlets bearing the same names as the ones which already exist.

Moreover, the draft also aims to put an end to the activity of mass media outlets funded by any foreign individuals or legal entities.

The proposal of an amendment on terminating the distribution and publication of a media outlet on which the court has passed a verdict twice a year on its unfairness through biased articles was also presented to discussion. Currently, it’s three times a year.

The draft caused some disputes.

MP Igbal Aghazade said there is no need for amendments: “Because none of the amendments is fundamental. The Azerbaijani language contains plenty of homonyms. In that sense, a new media agency can be created by using similar names. The MP also spoke against the provision on the termination or suspension of the production and distribution of mass media outlets”.

MP Zahid Oruj said the law is a conservative one, expressing satisfaction of its approval:

“Those who introduce themselves as “jihadist” actually serve some intelligence agencies. If the provision on the conservation of activity after three court verdicts did not work, from now on it will work. But the issue of closure was not clearly indicated either. A claim may be raised and acquitted,” he noted.

MP Tahir Rzayev too said he does not think it’s a right decision to terminate the activity of a mass media outlet: “But media reports are unbearable at times. 74 MPs have recently been described as “dumb MPs”. I called up the director of the website and expressed my dissatisfaction. But insulting elderly people is unacceptable. Why shall I not insult one who insults me? Shall I not call for a measure against them?”.

MP Siyavush Novruzov said there’s nothing about any restriction or difficulty: “The matter is just being concretized. You can criticize, you express your opinion, but you can’t insult anyone, violating their rights. In that case, who can disturb you?,” he said.

MP Ogtay Asadov said he has seen the list of “dumb MPs”, too: “The list was quite non-sense. The majority of those listed are members of Azerbaijan’s delegations to international organizations. The parliament has affairs abroad as well”.

Vice-Speaker Bahar Muradova said every media representative is first of all a citizen of Azerbaijan: “I would also like them to protect Azerbaijan’s interests with regard to negative information about Azerbaijan, along with positive one”.

The draft was approved after the discussions.