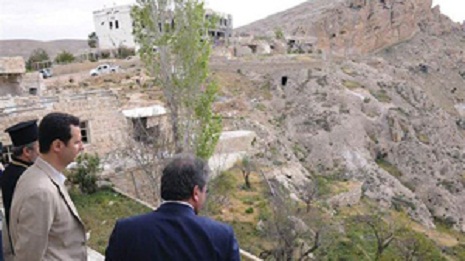 The Syrian army captured a strategic southern town from rebel fighters on Wednesday after a ferocious two-month bombardment, in an advance likely to result in President Bashar al-Assad`s forces regaining control of an international transit route, opposition sources said.
The fall of Khirbet Ghazaleh, situated in the Hauran Plain on the highway to Jordan, came after a Jordanian-backed Syrian opposition military council failed to supply weapons to the town`s defenders.

This raised resentment among opposition fighters over what they saw as a lack of Jordanian support for their efforts to defeat Assad`s forces in the region, according to rebel commanders and activists in the area.

The Hauran Plain, which extends to the Israeli occupied Golan Heights, is the birthplace of the revolt against four decades of family rule by Assad and his late father, which erupted in the city of Deraa in March 2011.

Rebel fighters, operating under the umbrella of the Free Syrian Army, cut off the highway to Jordan two months ago. But keeping the road off-limits to Assad`s forces depended on retaining Khirbet Ghazaleh, which is at a crossroads leading west to the contested city of Deraa, the sources said.

Before the uprising in Syria, billions of dollars in goods traded between Gulf countries, Turkey and Europe were transported along the highway, which passes Khirbet Ghazaleh before ending at the Nassib border crossing to Jordan.

About 1,000 rebel fighters withdrew from Khirbet Ghazaleh on Wednesday after losing hope that reinforcements would come from Jordan, which has been cautious about provoking a military response from Assad, activists and opposition fighters said.

"Assad`s forces started advancing from the north and west and I can still go back to Khirbet Ghazaleh but I cannot do anything," Abu Yacoub, commander of the Martyrs of Khirbet Ghazaleh brigade, told Reuters by telephone from Hauran.

"I can get a thousand fighters back but it is useless because I don`t have ammunition in my hands."

Abu Yacoub said he had contacted Ahmad Nemaah, head of the Jordanian backed military council, before ordering the rebel fighters to withdraw, but Nemaah told him he could not do anything.

"If we lost a battle it does not mean we lost for good. But everyone has turned against Nemaah," Abu Yacoub said.