President and his spouse attends solemn ceremony of Heydar Aliyev 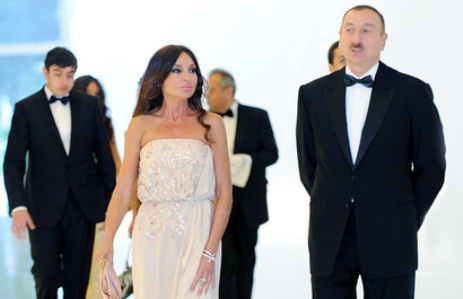 A solemn ceremony has today been held to mark the 90th anniversary of Azerbaijan`s national leader Heydar Aliyev.
Azerbaijani President Ilham Aliyev, his spouse Mehriban Aliyeva and family members, as well as state and government officials, and representatives of the diplomatic corps in Baku attended the event.

President Ilham Aliyev made a speech at the event. The President described national leader Heydar Aliyev as "the architect of the Azerbaijani state and a historical personality who devoted his whole life to his people and served them with loyalty".

The President highlighted the national leader`s tenure as the head of Azerbaijan, adding these years marked development in all spheres of the country`s life. He said 13 years of Heydar Aliyev`s leadership of Azerbaijan in the Soviet era saw the country become one of the most developed republics.

"The great leader did much to ensure Azerbaijan`s socio-economic development, and promote the country`s national values."

The President said the years when Heydar Aliyev was far from the leadership marked the beginning of negative processes in the country, adding the then authorities were helpless against these difficulties.

President Ilham Aliyev noted that after returning to power the national leader made courageous steps towards strengthening Azerbaijan`s independence, building modern political system in the country, and laying the foundations of its development. The President touched upon the founding of the New Azerbaijan Party, which, he said, had played a crucial role in the country`s socio-political life.

The Head of State hailed the national leader`s return to power as "a turning point in our contemporary history". The President said national leader Heydar Aliyev`s policy had been successfully continued.

President Ilham Aliyev also highlighted Azerbaijan`s achievements in the last ten years, saying the country is carrying out large-scaled projects and developing its non-oil sector.
The President said independence was the greatest wealth, adding: "We have an independent powerful state."

The ceremony continued with demonstration of a film on national leader Heydar Aliyev`s life and activities, which was followed by a concert.