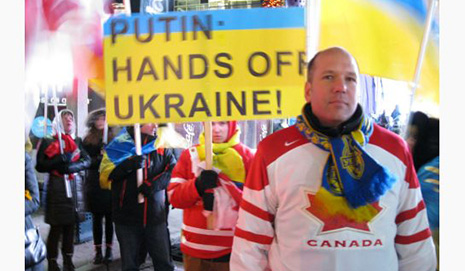 Protesters braved Monday’s deep freeze to condemn the Russian invasion of Ukraine outside the Air Canada Centre where the Russian team battled Canada for the World Junior Hockey Championship title.

“It is a rally to show support for Team Canada. We are very proud Canadians. We feel it is very important to make sure Team Canada feels our full support,” said Paul Grod, president of the Ukrainian Canadian Congress, which only began organizing the rally on Monday morning.

“However, it is also very important for the rest of the world to hear about the fact that (Russian President) Vladimir Putin has invaded Ukraine and has illegally annexed Crimea, and he has continued to fund an organized war in Ukraine, where thousands of Ukrainians have died as a result.”

In November 2013, pro-European demonstrations and civil unrest began in Kiev forcing the resignation of then pro-Russian President Viktor Yanukovych and his government. Conflicts subsequently broke out between Ukraine and Russia that ended with Putin’s regime taking over Crimea.

According to the United Nations, the conflict has since caused at least 4,707 deaths and 10,322 injuries.

Peter Schturyn of Toronto said he joined the protest hoping to continue to raise awareness that there is still a war between Ukraine and Russia.
“It’s not the warmest of days. But in spite of all the bad weather, we just want to continue to do our part, continue to support the people in Ukraine,” said Schturyn, adding the community will celebrate Christmas Eve Tuesday by raising funds and collecting clothes and sleeping bags for people in Ukraine.

Lifting a yellow-and-blue protest sign, Oksana Mallik said she hopes Canadians and the world do not forget Ukraine and its people.

“I was sorry for the people who are standing and protesting here. It’s freezing. I’d rather stay at home, but this is no comparison to the suffering of the people in Ukraine,” said the Mississauga woman.

“I think of the soldiers who have to fight in Ukraine, in worse conditions than here today. They have no food and must keep fighting. If Russia occupies Ukraine, it will not stop there. Please don’t support Russia.”