Standing Up to Putin 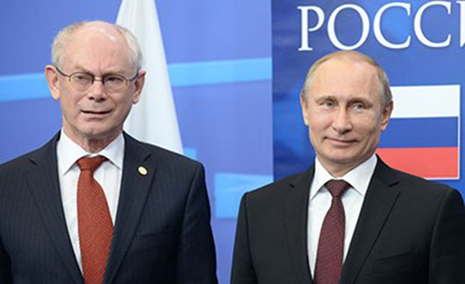 The accumulation of conflicts and crises in Eastern Europe and the Middle East poses new challenges for NATO and the European Union. If these challenges are to be met, both institutions – bastions of Western values and security – will have to clarify their objectives and adjust the way they operate. Should they fail to do so, the West’s two greatest political achievements of the postwar era may begin to unravel.

That NATO and the EU may lack the will to change is indicated by the fact that, even after Russian troops invaded Crimea and eastern Ukraine’s Donbas region, only part of the West was ready to admit that President Vladimir Putin was intent on restoring Russia as an aggressive global power. It took others months to accept the reality that Putin’s willingness to use force to change national borders in Europe could not go unchallenged.

Of course, there still has been no direct Russian attack on a NATO member state. But the state of turmoil just beyond the Alliance’s eastern border has created a reasonable fear in NATO’s Baltic member countries, as well as in Romania and Poland, about whether or not the Alliance would actually stand with them should they be threatened.

Putin’s revanchism is an attempt to undermine the entire model of international security – one based on cooperation and dialogue, not military force – that has prevailed since the end of the Cold War, and has long been the animating vision behind European unification. His aggression has dispelled whatever doubts had existed as to whether the transatlantic bond still mattered. The question now is whether the West retains the will, and the means, to chart a path through a crisis on its very doorstep.

When the first wave of Central European countries joined NATO in 1999, both the Russian Federation and Ukraine accepted their admission. Both were offered “special partnerships,” and dedicated channels of communication – most notably the NATO-Russia Council and the NATO-Ukraine Commission – were established to create trust and dispel fears that NATO posed a threat to its eastern neighbors.

Putin’s actions demonstrate that Russia does not accept that NATO is a defensive alliance that poses no threat to Russian security. His desire for a sphere of influence that limits Western influence in countries bordering Russia – above all, Ukraine – has revealed that efforts to build trust with the Kremlin have been for naught.
Given the gravity of the situation, it seems foolhardy to continue to grant Russia the privileged partnership with NATO that it has enjoyed since the late 1990s. Yes, the NATO-Russia Council – a useful infrastructure of communication in times of tension – should be maintained. But there should no longer be any pretense of partnership with Russia.
Moreover, new policies for protecting NATO’s partners in Eastern Europe, Central Asia, and the South Caucasus are badly needed. The West must convince the Kremlin to roll back its intervention in Ukraine, and make it clear that further use of military force will be met with countermeasures that are more severe than the sanctions imposed thus far.

In the long term, the best course of action will be to reduce European dependence on Russian energy. New liquefied natural gas terminals in Europe and legislative changes in the United States to enable the export of America’s burgeoning energy supplies will demonstrate to Russia that its window of energy-based leverage is closing.
In the short term, NATO and the EU must show the Ukrainians that they are not alone. They must maintain pressure on the Kremlin to reverse its intervention and abide by the Minsk Protocol, ratcheting up sanctions should Russia fail to live up to its word. Despite a nominally binding ceasefire, the situation remains uncertain and subject to rapid escalation, especially in light of Russia’s new military incursions in Donbas.
Only firmness will convince the Russian elite that Putin’s strategy of confrontation is a dead end for their country. The West must also avoid any temporary solution that could lead to the unintended breakup of Ukraine.

Should current sanctions fail to do the job, Europe and the US should widen them to include the oil and gas sector, which is the engine (and soft underbelly) of the Russian economy. The West can no longer afford the inconsistency that it has displayed until now, with EU countries pursuing policies that reflect their differing national interests. It is past time for all EU and NATO members to recognize their obligation of solidarity in the face of the Russian threat.

But it is the West’s long-term commitment that will have the greatest impact on the Kremlin. The West must become actively engaged in reforming Ukrainian society, including the country’s armed forces. Despite financial difficulties in the EU and the US, support for Ukraine’s efforts at reform and modernization is crucial. It will take firm support and generous assistance to give Ukraine the chance to repel Russian aggression and join the community of democratic, liberal, and prosperous countries.