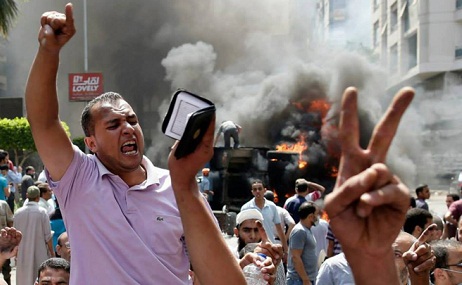 At least four Egyptians have been killed and several others injured in a fresh clampdown by security forces on anti-government protesters, media reports say, Press TV reported.
This came after large crowds took to the streets in major cities across the North African country on Friday.

According to media sources close to the Muslim Brotherhood, at least two people died in an attack by Egyptian soldiers in the Matariya district, east of Cairo. Another protester was killed in Giza and the fourth one is thought to have been killed in Fayoum, south of Cairo.

Reports say that dozens of protesters were injured and more have been arrested in the northern port city of Alexandria.

Massive protest rallies were also held in the Nile Delta cities of Sharqiya and Daqhaliya as well as Minya in central Egypt.

The protesters chanted slogans against administration of President Abdel Fattah el-Sisi and the upcoming elections.

The government says it is going to hold parliamentary elections in March. Protesters say the new legislature will leave no room for opposition to President Sisi.

Egypt has been the scene of massive anti-government protests with continuous clashes between security forces and supporters of former President Mohamed Morsi.

Morsi, Egypt’s first democratically-elected president, was ousted in July 2013 in a military coup led by Sisi, the then army commander.

Rights groups say the army’s crackdown on the supporters of Morsi has left over 1,400 people dead and 22,000 arrested, while dozens have been sentenced to death in mass trials.