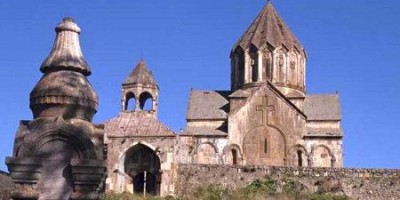 From a legend of the first Christian state to the strategy of occupation: Brief history of the Albanians
Submitted for the competition held by "Newtimes.az” web portal on the occasion of the 95th anniversary of the declaration of the first secular and democratic republic of the Orient.

According to Greek and Roman sources, including the likes of Strabon, Ptolemeus and Plinius, Albania which meant "mountainous region” in Greek and Latin defined a space between the Caspian Sea and Georgia extending from Caucasus Mountains in the north down to the Aras River in the South (1).

Presumably, a region that totally conformed to the boundaries of modern Azerbaijani lands acquired the name Arran (Erran) upon the Islamic conquest and the Albanian name was largely obliterated in the wake of complete Turkic takeover of the region (2). Reigning for nearly 1000 years, from 3rd century BC to 8th century AD, Albanian State was comprised of ethnic groups speaking 26 different tongues and Turks were known to be among those (3).

Researching the history of Albanians, revealing their state, society and cultural structure throughout various periods is crucial in terms of defining international, cultural and mutual boundaries, and general ethnic-cultural picture of the South Caucasus, and their historical and cultural realities and identity (4). Therefore, starting with the problem of Nagorno Karabakh, it is impossible to correctly analyze confrontations in the region without researching the Albanian history.

Despite that most communities inhabiting historical Albanian lands converted to Islam in the wake of invasion during Omar’s rule, non-Muslims continued to largely inhabit mountainous areas of central and northern Azerbaijan, such as Nagorno Karabakh. This Christian community known as Albanians, gradually became Gregorian under the influence of Armenians, with churches turned into Armenian ones and literature translated into Armenian. Eventually, all attributes pertaining to the Albanian people were obliterated (5). Claiming the legacy of Albanians, who in fact adopted Christianity long before they did, Armenians pursued a policy of obtaining privileges from the West by appropriating a self-branded title of the "first Christian nation” of the world. One of the key evidences that vividly expose the fraud is the term "Christian Turks” used by Russian sources to describe Gregorian population of Karabakh of the time (6).

Ignoring Albanians and the Albanian civilization that ruled the lands inclusive of the Nagorno Karabakh, Armenians claim Nagorno Karabakh to be a part of some ancestral Armenian kingdom, and suggest that churches are the proof (7). Nevertheless, mere chronology may reveal that those churches belonged to one of the indigenous people of the Caucasus - Christian Albanians (8).

Guided by some Machiavelli approach and certain political calculations, Armenians sought to claim the legacy of Albanians. Emphasis on the thesis about the first "Christian nation” (9) on earth, especially favored by the Armenians historians, is a strategy to obtain support from the Christian world. This support was employed to exert diplomatic and political pressure upon neighboring countries and to disguise unjust actions of the Armenians, from extermination of the Albanians to the occupation of Azerbaijani lands in the 1990s and expulsion of 1 million refugees and internally displaced persons (10) under the curtain of martyrdom and myth of the first Christian state.

Armenia’s policy of aggression targeting its neighbors is closely linked with historical distortion of the Armenia’s name. The name "Armenia” is known to be commonly used in history as a geographical name that defines a space from Eastern Anatolia to South Western-Caucasus, deprived of definite borders and domestic consistency (11).

Nation that is today called Armenians and that refers to itself as "hay”, nurturing a legend of being descendants of a father named "Hayk”, has nothing to do with historically used geographical name of Armenia. Assyrian, Median, Persian and Parthian sources as well as Anabasis of Xenophon and Geography of Strabo fail to mention "hay” or the name "Hayastan” that describes the country (12).

Hayk tribe, alien to the region known as Armenia and unmentioned in ancient sources, assumed the name of the region as ethnic identity and thus, tried to substantiate its historical claims (13). Similarly, the hayk tribe, that was subsequently to acquire the name "Armenian”, chose the strategy to purloin political, economic and cultural values of the Gregorian societies in the name of Armenians. Thus, Christianity and Gregorian etiquette connected with it became a key element of Armenian identity. In this regard, words of the Armenian historian Pasturmajiyan describing the church best reflect the role of the religion in shaping of Armenians as people: "It’s a body that serves the purpose of reincarnation of every Armenian soul”.

This mono-nationalistic policy pursued by the Armenians constitutes an obvious monument of anachronism, contradicting the Zeitgeist (spirit of the time). However, due to incomprehensive delivery of the realities to world’s Christian community and fanatic religiousness of certain Christian quarters entailed rendering of unjustified support to the Armenians. Owing to support of the Christian world founders of one thousand years long culture – Albanians were banished to the dusty shelves of history.

Forwarding completely detached from historical truth territorial claims against almost all its neighbors, with the exception of Iran, Armenia alleges to be the "first Christian state” while in fact having appropriated the legacy of the Albanian society that long preceded them. Thus, occupation of the Azerbaijani lands, policy of aggression against Turkey and Georgia, genocide in Khojali and massacres committed by the ASALA terrorist organization are disguised under the myth about the "first Christian state”.

Audrey L. Altsadt, The Azerbaijani Turks: Power and Identity under Russian Rule, Hoover Institution Press, Standford, 1992, s. 3.
İslam Ansiklopedisi, Cilt 3, İstanbul, 1991, ss. 394-395.
Frederik Coene, The Caucasus: An Introduction, Routledge, New York, 2010, s. 97.
Yaşar Kalafat, Mahmut Niyazi Sezgin, "Ermeni Kültür Stratejisi ve Albanlar Meselesi”, (https://azvision.az/redirect.php?url=http://www.eraren.org/tur/eren.html), (11.02.2013).
Bilal Dedeyev, "Dağlık Karabağ Sorunu’nun Tarihi Arka Planına Bakış”, Karabağ Savaşı: Siyasi, Hukuki, Ekonomik Analiz, Der. Osman Nuri Aras, Qafqaz Üniversitesi Kafkasya Araştırmaları Enstitüsü Yayınları, Bakü, 2008, ss. 17-18.
Yaşar Kalafat, "Gregoryan Türklerin Stratejik Boyutu”, (https://azvision.az/redirect.php?url=http://www.yasarkalafat.info/index.php?ll=newsdetails&w=1&yid=121), (12.02.2013).
Gish Temple, being the first chuch of the South Caucasus and built by Albanians in Gish viilage in Shaki district of Azerbaijan, frustrates the Armenain myth about the "first Christian state”.
"Reply by the Delegation of the Republic of Azerbaijan "to the Response of the Delegation of the Republic of Armenia to the Written Questions No. 526 and 528 by the Azerbaijani Parliamentarians Ms. Pasheyeva and Mr. Huseyinov”, Azerbaijan Foreign Policy Planning and Strategic Studies Department, pp. 4-6, https://azvision.az/redirect.php?url=http://www.azembassy.ca/documents/conflict/culture-nakhichevan-christianmonum.pdf, (05.01.2013).
Allegations of the Armenians on the establishment of the first Christian state in the year 301 are inconsistent with the historical facts. Those years coincide with the rule of the Roman emperor Diocletian, known to be a follower of radical pagan faith that waged merciless struggle against Christianity. Known to be the last ruler tyrannizing Christians, in the year 303 he issued a decree leading to comprehensive pressure upon the Christians. Meanwhile, Diocletian’s associate, Armenian Prince Tridat lived in exile in Rome due to occupation of his lands by the Sasanians and was only able to return home in 298. Apparently, it was inconceivable for a vassal Armenian prince, deprived of political independence, to proclaim Christianity as an official religion. Even "Gregory the Illuminator” was among the victims of enforcement of Diocletian’s decree by Tridat. Deemed by the Armenians the "genuine” enlightener, Gregory was imprisoned for 14 years, and was only released in 313, upon the issuing of a Milano decree by the Roman emperor Constantine I that lifted the pressure against the Christians. Taking into account that the decree is considered to be an official recognition of Christianity in the Roman Empire, the earliest adoption of Christianity in Armenia was possible in 314; it totally obliterates the thesis on Armenia being the first Christian state (see Erich Feigl, "Ermeni Milli Kilisesinin Zaferi ve Trajedisi”, Ermeni Araştırmaları, Sayı2,Haziran-Temmuz-Ağustos 2001). https://azvision.az/redirect.php?url=http://www.eraren.org/index.php?Lisan=tr&Page=DergiIcerik&IcerikNo=211, (03.12.2012).
Feigl, same article.
Mahmut Niyazi Sezgin, "Anadolu Türklüğünün Kayıp Halkası: Gregoryen Türkler”, 2023 Dergisi, Kasım 2005, Sayı 15, s. 68.
Erdal İlter, "Ermenistan Adı, Menşei ve Bazı Ermeni İddiaları Üzerine”, Ermeni Araştırmaları, Sayı 6, Yaz 2002, (https://azvision.az/redirect.php?url=http://www.eraren.org/index.php?Page=DergiIcerik&IcerikNo=153), (03.01.2013).
Kalafat ve Sezgin, same publication.