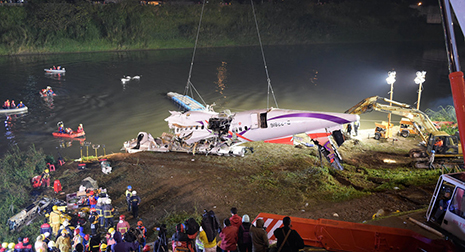 According to CNA, rescue work continued throughout the night after the aircraft crashed late Wednesday, 12 people are still missing, 31 have died. The plane’s black boxes have been recovered.

Rescue personnel search for passengers from the wreckage of a TransAsia ATR 72-600 turboprop plane that crash-landed into the Keelung river outside Taiwan`s capital Taipei in New Taipei City on February 4, 2015.

The TransAsia Airways ATR-72 aircraft was en route from the Taipei Songshan Airport to the island of Greater Kinmen when it crashed into the Keelung River shortly after takeoff. Five crew members and 53 passengers, including at least two children, were on board the plane at the time of the crash.
One of the TransAsia pilots reportedly sent distress signals moments before the accident, indicating an engine malfunction.

TransAsia is a private airline based in Taipei. This is the second TransAsia ATR-72 to crash since last year, when 48 people died and 10 were injured on the island city of Magong when the plane tried to land in difficult weather conditions.