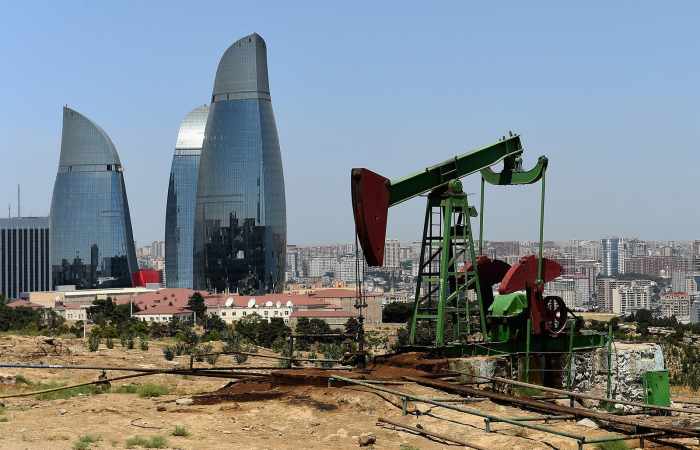 In the production and transportation field

1803. Hadji Kasumbekh Mansurbekhov began to extract oil from 2 oil wells in the offshore 18 and 30 m apart from coast in the Bibi-Heybet Bay the first offshore oil field was destroyed because of the powerful storm in the Caspian in 1825.

1846. In Bibi-Heybet the first oil well of the world about 21 m deep was drilled with the purpose of il exploration on the proposal of Vasili Semyonov – Council member of South Caucasus office, i.e. drilling operations resulted positively for the first time in the world. The operations were conducted under the leadership mayor Alekseyev – director of Baku fields.

1847, July 8-14. In his documents, head of the Caucasus region Prince Michael Vorontsov officially approved the fact of drilling the first oil well in the world in the Caspian coast (Bibi-Heybet) and its positive results.

1877. “Zoroaster” oil-transportation streamer with steel case was first built in Motala (Sweden) on the order of “Nobel Brothers” firm, oil residues was used for heating the streamer.

1897. A tanker with 2 propellers called “Assan Dadashov” appeared in the Caspian Sea for the first time in the world.
1897-1997. The total length of Baku-Batumi pipe- the longest kerosene pipe in the world was 829 versts and this like belonged to South Caucasus railways, its total value was equal to 50 million rubles.

1902. The grant of first Nobel Prices by Alfred Nobel. Swedish historian Erik Berqenqren (1962), who worked with archives of the Nobel family notes that Alfred’s decision over the withdrawae of his capitals from Baku fields (it comprised 12% of Nobel prize) resulted soon with the establishment of the international award.

1903-1904.The construction of the first large diesel tankers – “Vandal” and “Sarmat” motor ships under Eminanuel Nobel’s leadership. The depth of “Vandal” motor ship reached 74.5 m for the first time in the world; its load capacity was 750 tons, its speed wasn’t more than 7.5 sea miles (1 mil=1.852 km per hour); here non-reversible three-cylinder diesels were installed with constant current generator.

1909. For the development of oil layers in the deep Caspian, casting operations began in the Bibi-Heybet Bay for the first time in the world. The operations were completed with the leadership of engineer Pavel Potoski.

1910. Member of IRTC BC Ivan Qlushkov prepared “Instructions on Drilling Oil Fields” for the first time in world oil practice college student’s in Baku were taught essentials of drilling on the basis of these instructions. After three years, he published a monograph called “The development of Oil Wells”. “Production of Liquid fields-oil and salty water”.

1924. 1. The first oil well with piles in the form of island was drilled in Ilichbay.

2. Matyev Kapelyushnikov drilled the first oil well with (drilling unit) in Surakhani, its depth was about 600 m.

1933-1934. Khubentsov brothers in Baku proposed the construction of the base in the form of wooden pontoon for the first time in the world: an oil well in the depth of 365 m was constructed from this base. The first floating drilling rig began operating in the Caspian since September, 1934.

1936. 1. The first Soviet group of engineers in the world (Peter Shumilov, Eyyub Tagiyev and others).

2. A.M.Pobeden prepared the structural map of the Caspian subsurface in the offshore Merdekan settlement and Absheron strait in order to realize structural drilling for the development of offshore oil fields for the first time in the world.

1940. In the Qala field, electrical drilling of Ostrovski, Aleksandrov and other constructions was carried out for the first time.

1949. On August 24, for the first time in the history of world oil industry, exploration of unique offshore fields-oil Rocks was started and still marine bases were constructed. The first well was drilled in a month, the oil gushed after reaching 1000 m depth.

1958. The double propeller drilling rig with was demonstrated in the international all its equipments held in Brussels. The creating team of this rig with the leadership of professor Eyyub Tagiyev gained Golden Medal.

1971. On March 28, 1 billion tons of oil was produced the first day of oil production in Azerbaijan.

1976. Highly stable, deep ventilating drilling cross-bar prepared from the new steel brands that passed all national and world standards for its stability and reliability was successfully tested in the Soviet oil fields (“Bashneft”, “Udmurtneft” and “Permneft”) in December.

On September 20, 1994, Azerbaijani President HeydarAliyev signed the international contact – “Contract of the Century on the development of “Azeri-Chirag-Guneshli” field, which was ratified by the Parliament on December 2. The Contract came into force on December 12. The amount of the Contract is nearly equal to billion USD.

2005. The Presidents of Azerbaijan, Georgia and Kazakhstan gave a start to the filling process of highly important Baku-Tbilisi-Ceyhan oil pipeline in Sangachal, Baku in May.

In the field of processing.

1837. In Balakhani, Nikolay Voskoboynikov’s oil refinery began operating for the first time in Absheron and in the world.

1883. In Baku, in the Nobel Brothers plant for the first time in the world the cube battery projected by V.Q.Shukohov and I.I.Yenin was installed for constant distilling of oil.

1885. Engineer Q.V.Alekseyev projected and installed cubic industrial unit to get gasoline and kerosene by means of cracking (separation into pieces) of oil goudron in Baku (in S.M.Shibayev’s plant) for the first time in the history of oil industry.
1891. V.Shukhov and S.Qavrilov discovered the thermal pipeline cracking unit (patent № 12926) that operated continuously for the first time in the world.

1900. International Oil Congress awarded Vladimir Markovnikov with Golden medal for the complex research of Caucasus and Absheron oil, which led to the discovery of new hydrocarbons- naphthenic.

1901. In Germany, “Friedrich Viweg u Sohn” publishing house published in Germany Baku oil chemist R.A.Vishy’s book “Naphtenic (cyclic oil polymethyls) and their position among other hydrocarbons”. This book is considered to be the first complete and systematic research of naphtenic in the world.

1905. Compression method of oil development was practiced in Balakhani for the first time in the oil practice of the world.
1912. Oil engineer Semyon Kvitko prepared the method of thermal separation of oil residues in Baku. His research on the “production of gasoline out of the separation of high-temperature black oil under pressure and without pressure” was awarded patent number 21963.

1914. In Baku, professor M.M. Tixvinskiy prepared the method of extraction of oil with the help of compressed gas- gas lift for the first time in the world petroleum science.

1915. For the first time in the world, Professor Nikolay Zelinskiy proved the possibility of using florid and Bakhchasaray clay besides oxide metals (titan, aluminum, and zinc) as a catalyst for oil cracking.

1920. On November 14, Baku Polytechnic Institute named after M.Azizbekhov was founded. This university (later- Azerbaijan Institute of Oil and Chemistry, currently- Azerbaijan State Oil Academy) is the first high school in Europe and Asia that prepares engineering staff in all fields of oil industry.

1929-1934. In Baku, Vladimir Shukhov, Matyev Kalelyushnikov, and Fatullabekh Rustembekhov discovered and installed pipeline cracking unit. The process carried out in this unit entered world oil history as “soviet cracking” and played an important role in the development of deep separation of oil.

1934. Articles by Fatullabekh Rustembekhov analyzing national and foreign practice were published in the magazine “Oil economy in Azerbaijan”. He interpreted for the first time the theoretical and practical essentials of deepwater oil fields and of construction of oil wells in the Caspian Sea.

1936. In January, an industrial unit for obtaining ethyl alcohol from oil gases was put into operation in Baku. The unit constructed by Baku oil-chemists (McDalin and others) was the first industry unit of this type in the world.

1939. Murtuza Nagiyev’s research, in which theoretical essentials of acceleration of chemical processes with the help of recirculation on the example of thermal cracking were interpreted, was published for the first time in the world.

1942. Yusif Mammadaliyev discovered a completely new method of obtaining high-octane components for aviation petrol. A new industrial method of synthesis of toluene out of crude oil was prepared and applied under his leadership, as a result, the quality of toluene used in the preparation explosives.

1949. “Qiprodeniz neftgaz” scientific-research and project institution, which began the construction of hydro-technical units in the blue waters, was founded for the first time in the world.

1977. Professor Bahadur Zeynalov prepared the process of obtaining synthetic naphthenic acid through the direct oxidation of naphthenic hydrocarbons for the first time in the world.

2005. In accordance with the decision of UNESCO 2005 was declared the year of academician Yusif Mammadaliyev in his honour; the outstanding oil chemist- inventor of the Victory fuel played an unprecedented role in the victory over fascism in the World War II.