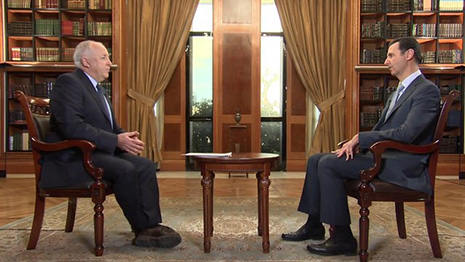 In a wide-ranging interview with the BBC`s Middle East editor Jeremy Bowen, Syrian President Bashar al-Assad talks about the devastating civil war, the use of barrel bombs, the battle against Islamic State and al-Qaeda and relations with the US.

Below are excerpts from the interview recorded in the Syrian capital Damascus.

Q: Mr President, you`ve lost control over large areas of Syria, the Islamic State has emerged, there are perhaps 200,000 Syrians dead, millions have lost their homes. Has Syria become a failed state?

A: No, as long as the government and the state institutions are fulfilling their duty toward the Syrian people, [we] cannot talk about failed states.

Talking about losing control is something completely different. It`s like if you have [an] invasion of terrorists coming from abroad and the government is doing its job in fighting and defending its country.

Q: Can we briefly go back to when all this started in 2011 - you`ve said that there were mistakes made in the handling of those early demonstrations. Did you make mistakes yourself?

A: No, I never said we made mistakes in handling this. I always said that "anyone could make mistakes", but there is a difference between talking about, or asking your question about policies and about practice.

If you want to go back to policies, we took the decision to fight terrorism from the very beginning. We took the decision to make dialogue on [a] national level, and I think both policies are correct. While if you want to talk about mistakes in practice, and that some mistakes [have been] committed towards some civilian, that happened from time to time, and some people were punished for these mistakes.

Q: You`ve talked about the influence of terrorism, as you call it, from the very beginning. But I was able as a reporter to go to some of those early demonstrations inside Damascus, in areas outside as well, and people there were not saying they wanted an Islamic Caliphate - they were saying they wanted freedom, democracy - not some kind of vision that IS have now for the country. Do you think you got it wrong?

A: You in the West called it that time, and some still talk about that period as [a] peaceful demonstration period.

And I will tell you that during the first few weeks many policemen were killed. Shot dead. I don`t think they were shot dead and killed by the sound waves of the demonstrators - so it was just a fantasy to talk about this... we have to talk about facts. From the very beginning the demonstrations weren`t peaceful.

Q: What about barrel bombs, you don`t deny that your forces use them?

A: I know about the army, they use bullets, missiles, and bombs. I haven`t heard of the army using barrels, or maybe, cooking pots.

Q: Large barrels full of explosives and projectiles which are dropped from helicopters and explode with devastating effect. There`s been a lot of testimony about these things.

A: They`re called bombs. We have bombs, missiles and bullets... There is [are] no barrel bombs, we don`t have barrels.

Q: On the fight against IS and al-Qaeda, the US and others have said you cannot be a partner in that fight. Would you like to be partner, would you like to join the coalition?

Q: You`ve been very harsh in your criticism of the Saudis. Now the Saudis say they are against IS, they are frightened because IS do not want a royal family in Saudi Arabia. So isn`t it logical that they want them out? Why would they support them?

A: First of all, the source of this Islamic State ideology, and other al-Qaeda affiliated groups are the Wahhabi that have been supported by the royal family in Saudi Arabia. So just to say that "we do" and "we don`t", it doesn`t matter. It`s what you do - what the action that you are taking in order to prove that what you are saying is correct.

Q: Let`s talk about American attitudes. Your departure from office is still the official American policy, but there are signs that they are softening... Do you believe that you are now being seen as part of the solution?

Q: Syria has been very isolated, you`re under sanctions here, people can`t use credit cards, you`ve been cut off from a lot of the commerce of the world. You must surely welcome a situation which might get you back into the family of nations in a way that you haven`t been since 2011?

A: We`re not against co-operation with any country, we will never be. We didn`t start this conflict with the others. They started, they supported the terrorists, they gave them the umbrella.

It`s not about isolating Syria now, it`s about an embargo on the Syrian population, on the Syrian citizens. It`s different from isolation, it`s completely different.

Q: There`s the American military in the air above Syria and the Syrian Air Force. But there haven`t been any incidents between the two, no shots seem to have been traded, no planes have been shot down. That suggests to me surely that someone is talking to someone here?

Through a third party - more than one party - Iraq and other countries. Sometimes they convey message, general message, but there`s nothing tactical.