`Turkey extended hand to Armenia, but it did not find a response` 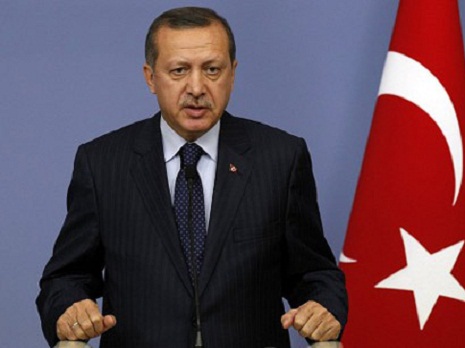 Erdogan called response to the invitation addressed to the Armenian leadership in connection with the 100th anniversary of the Battle of Canakkale
As part of his official visit to Colombia, Turkish President Recep Tayyip Erdogan addressed the symposium titled "1915: the longest year of the Ottoman Empire" organized by Turkey`s Ankara University and Externado University in Bogota.

Erdogan said that the 1st World War should be thoroughly analyzed for the correct explanation of the world politics.

Erdogan recalled that southern and western parts of the Ottoman Empire were occupied after the 1st World War, noting this history was written not by the historians, but by the great powers.

“We think that the history should be written by historians. The 1915 events were also written by the great powers. What Armenians did against Turks and what Turks did against Armenians 100 years ago was not properly discussed. We have opened all archives. The number of historical documents investigated exceeds a million. Armenia and the other third countries must also disclose their archives. Let us remove the 1915 events from the area of politics and refer to science and scientists. Taking political decisions in parliaments and giving the truth to the lie, it is impossible to write history correctly,” president Erdogan underlined.

Erdogan said the Armenian diaspora conducts campaign against Turkey regarding the 100th anniversary of the 1915 events.

“Turkey doesn’t aim at conducting propaganda. We have always heartily wanted the 1915 events to be investigated and described truly. We have extended hand to Armenia. We have made an effort to open a new page. Unfortunately, our peace hand has always been rejected by the influence of Armenian diaspora", he said.

Reminding that Turkey has sent invitation to the Armenian government to attend the events regarding the 100th anniversary of the Battle of Canakkale, the Turkish president called the opposite side’s response disrespectful. “We wanted them to arrive in Canakkale on April 24 and feel the atmosphere. However, they prevented peace and dialogue through their impolite statements,” Erdogan completed.