Oil for security has underpinned the U.S.-Saudi alliance for 70 years 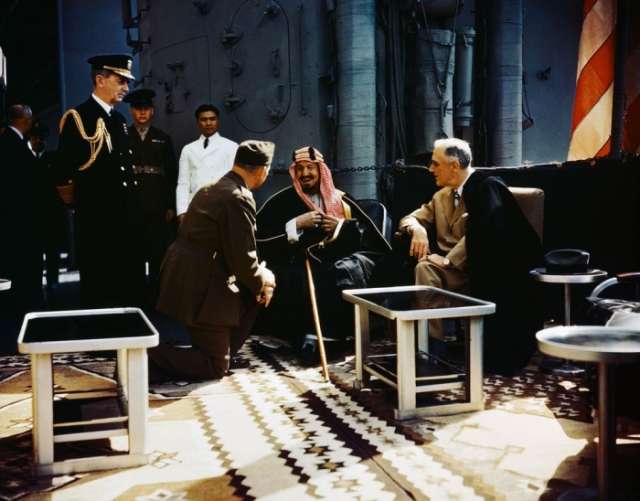 That Donald Trump chose Saudi Arabia for the first stop on his first overseas trip as president reflects a seven-decade alliance based on the premise of oil for security, as well as shared current security concerns and the determination to curb Iranian influence in the Middle East.
Here are the critical junctures of a relationship between two unusual allies: the world’s most powerful secular democracy and a fundamentalist Muslim monarchy. 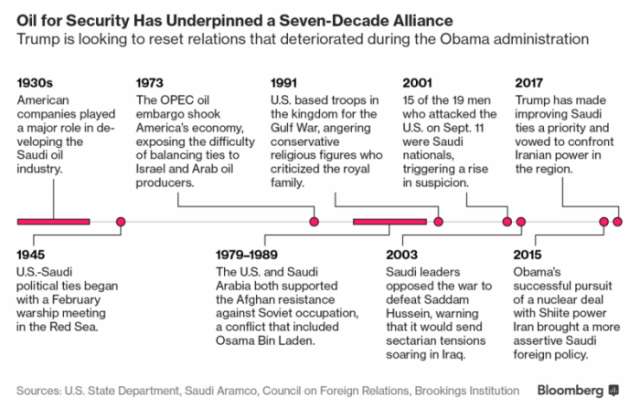 The U.S. and the Al Saud monarchy have been strategic partners since King Abdul-Aziz Al Saud, the founder of modern Saudi Arabia, met President Franklin D. Roosevelt aboard the USS Quincy in early 1945. At that meeting in the Suez Canal, the men discussed two issues that have determined much of the region’s post-World War II history -- the creation of a Jewish homeland in Palestine, and a Saudi-U.S. pact based on American security guarantees for the kingdom in return for U.S. access to Saudi oil.

America’s role in the history of Saudi oil

Saudi Arabia signed its first oil concession deal with Standard Oil Co. of California in 1933. Five years later commercial quantities of oil were discovered in the eastern region of Dammam. The Arabian American Oil Co. was formed in 1944 and based in New York until 1952. The Saudi government gradually increased its stake in the firm, known as Aramco, and by 1980 owned it outright.

Israel and the oil embargo

Tensions spiked as OPEC imposed an embargo against the U.S. and other countries for their support of Israel in its 1973 war against Arab armies. The move shook the American and global economies, and had long-lasting implications for Mideast diplomacy and the energy industry. It laid bare the difficulty the U.S. faced balancing its support for Israel and maintaining strong ties with Arab oil producers.

Afghanistan, the Soviets and Bin Laden

The decade-long Soviet occupation of Afghanistan from 1979 spurred a resistance movement that was supported by the U.S., Saudi Arabia and Pakistan. It was joined by thousands of Sunni Muslim fighters, including Saudi-born Osama bin Laden, son of the founder of one of the region’s largest construction companies, and future al-Qaeda chief.

The U.S. based troops in Saudi Arabia for its 1991 war to force Iraq’s army from Kuwait. Some conservative religious figures in a nation that’s home to Islam’s holiest shrines condemned their presence. U.S. troops left Saudi Arabia in 2003 after Saddam Hussein was toppled, helping to curb criticism of Saudi rulers. Counter-terrorism cooperation was improved and Saudi Arabia is the top purchaser of U.S. weapons, according to the Stockholm International Peace Research Institute.

Fifteen of the 19 hijackers involved in the attacks, which killed about 3,000 people, were Saudi nationals. Suspicion between the two nations rose as Americans questioned their special relationship. Bin Laden, who headed the al-Qaeda terrorist group before being killed by U.S. special forces in Pakistan, had called for the overthrow of the Saudi royal family and the removal of U.S. troops from the kingdom.

Saudi leaders opposed George W. Bush’s decision to remove Saddam Hussein in 2003 and did not join the coalition, arguing the invasion would split Iraq along sectarian lines. The war and its aftermath unleashed conflict between Iraq’s majority Shiites and Sunnis, which years later contributed to the creation of the jihadist movement now known as Islamic State.

Barack Obama’s successful pursuit of a nuclear deal with chief Saudi rival Iran left the kingdom feeling shunned. Along with other oil-rich Sunni Arab states, it pursued a more assertive foreign policy, sending troops to crush a pro-democracy uprising in Bahrain, backing Abdel-Fattah El-Sisi’s takeover in Egypt and intervening militarily in a civil war in Yemen. Obama reportedly described the U.S. relationship with the kingdom as “complicated.” “From the Saudis’ perspective, anyone was better than Obama,” said James M. Dorsey, a Saudi specialist and senior fellow in international studies at Nanyang Technological University in Singapore.

Despite last-ditch lobbying by the White House and Saudi Arabia, Congress in September passed a bill allowing the kingdom to be sued for involvement in the Sept. 11 attacks. The Saudi foreign ministry said the legislation would contribute to the “erosion” of the principle of sovereign immunity and have a negative impact on all nations, including the U.S. Trump won election in November and had made warmer ties with Riyadh a priority. He has called the 2015 Iran nuclear deal a “disaster.”