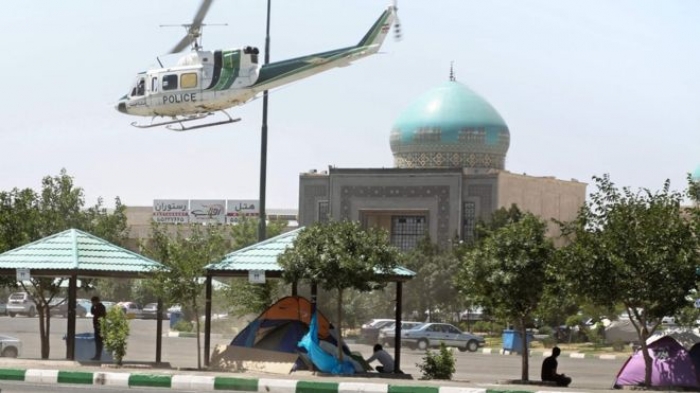 Iran's foreign minister has denounced as "repugnant" a White House statement on Wednesday's terror attack in Tehran that said Iran was a "terror sponsor".

President Trump had said he was praying for the victims, but added that "states that sponsor terrorism risk falling victim to the evil they promote".

But Javad Zarif said Iran "rejected such claims of friendship" and claimed the attackers from so-called Islamic State had been "backed by US clients".

Thirteen people died in the attacks.

Iran says the attackers, all of whom were killed, were Iranians who had joined IS. The militant group has threatened further assaults on Iranian Shia Muslims.

In an earlier tweet, Mr Zarif appeared to blame its regional rivals for the attack, saying: "Terror-sponsoring despots threaten to bring the fight to our homeland. Proxies attack what their masters despise most: the seat of democracy."

Sunni-ruled Saudi Arabia - a key US ally - and Shia-majority Iran back opposing sides in conflicts across the region.

Saudi-based charities and individuals have also been accused of financing Sunni extremist groups across the region over the past two decades.

Iran's powerful Islamic Revolution Guards Corps (IRGC) have already accused Saudi Arabia and the US of being behind the attacks. Both countries have condemned the violence.

However, Iranian Supreme Leader Ayatollah Ali Khamenei has downplayed the attack's significance, saying terrorists "fumbling with firecrackers" would not "affect the will of our nation".

It comes amid heightened tensions in the Middle East, with Saudi Arabia and other Arab states cutting ties with Qatar over alleged support for Islamist militants in the region and closer ties with Iran.

What kind of presence does IS have in Iran?

Claiming the attack, IS posted a video which showed what it claimed was footage from inside the parliament building.

BBC Persian's Jenny Norton says that despite Iran's active involvement in fighting IS in both Iraq and Syria, the Sunni group has not until now carried out any attacks inside Iran, and appears to have little support in this predominantly Shia country.

However, our analyst says, in recent months the group has stepped up its Farsi-language propaganda efforts - targeting Iran's restive Sunni minority.

Iranian intelligence agencies claim to have foiled a number of IS-inspired plots.

But by mounting a successful attack, IS could claim a major coup against a traditional foe that other Sunni jihadist groups, including its rival al-Qaeda, have failed to target in the past.

What is the likely effect of the attacks?

Middle East analyst Dina Esfandiary says one possible consequence will be increased calls by hardliners for tougher action against IS in Iraq and Syria.

Public support for action in Iraq is likely to grow, as it did when IS took swathes of territory in the country in 2014.

But Iran's involvement in Syria is not popular, our analyst says - it is seen as having few benefits and costing too many Iranian lives.

The attacks will also boost the popularity of the Revolutionary Guards, seen as protectors of the nation.