Who Will be Iran`s Next Supreme Leader? 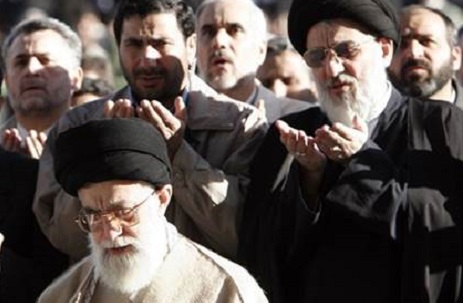 Amid reports of Khamenei`s hospitalization in critical condition, Iran expert speculates who will take the helm of the Islamic regime.

Arab reports on Wednesday indicated that Grand Ayatollah Ali Khamenei, Supreme Leader of Iran, was hospitalized with multiple organ failure, giving the speculation about his replacement an added sense of urgency.

There have been rumors about Khamenei`s health declining before, and it is in no way clear that the Ayatollah will die this week or next month, or any time in the next couple years.

But to find out who is next in line, Arutz Sheva spoke with Meir Javedanfar, an expert in Iranian politics and instructor at the Interdisciplinary Center in Herzilya, on the possibilities of his successor.

“There has been nothing publicly about it - only assumptions. In my opinion, the most likely candidate is Ayatollah Mahmoud Hashemi Shahroudi. He is close to the Supreme Leader, the Revolutionary Guards and is very senior in Iraq," Javedanfar said.

As Javedanfar described in another article on the topic last September (which can be viewed here), Shahroudi`s influence in Iraq is oddly strong.

Shahroudi is close to the Iraqi Da’wa party, the party of former Iraqi Prime Minister Nuri al-Maliki and current Prime Minister Haider al-Abadi. What makes him an even more tempting candidate for the Iranian elite is that Shahroudi is reportedly the go-to religious figure for Maliki and Abadi – their marja al-taqlid.

“A marja al-taqlid serves as a ‘source of emulation’ for Shi`ite Muslims” akin to a gadol ha’dor for Orthodox Jews. “A religious source of emulation carries religious weight and influence at minimum as well as political influence, especially in a religiously divided country like Iraq,” as Mr. Javedanfar described in his September article.

While continuing to stress that Shahroudi is by no means a shoe-in – information is extremely scarce on who has influence on the final choice and if there are more obscure candidates planning to seek the nomination – Shahroudi has strong connections in both Iraq and Iran.

He was born in Iraq, fled in 1980 to escape Saddam Hussein and represented Ayatollah Muhammad Baqir al-Sadr in Iran just before Hussein executed al-Sadr. He integrated into Iran’s politics, running the country’s judiciary for 10 years (a job reserved for the Supreme Leader’s closest political allies).

Since 2011, he has had an office open in Iraq representing the Supreme Leader’s office, making his connection with Iraq’s Prime Ministers much more intimate.

The Assembly of Experts, a religious body that chooses the Supreme Leader, might not be as important as Shahdouri’s personal connections.

“Khamenei will probably choose his successor formally. But the Assembly of Experts is not as powerful as it used to be. There is heavy Revolutionary Guard influence there now. There will be a lot of lobbying before it even gets to the Assembly. The decision will probably be made beforehand.”

Shahroudi stands out because he might be able to accomplish something that Khamenei, and even the Islamic Republic’s founder Khomeini, could not. He could appeal to the majority of Shii`te Muslims as the most followed marja al-taqlid.

“With Shahroudi, that’s the thing," said Javedanfar. "If he were appointed then he would also be followed in Iraq.”

This is important because Iraqis still see their religion as more of a guidance system. The most influential Grand Ayatollah and marja of the era is widely considered to be Ali Sistani in Iraq, who opposes the religious justification for the Islamic Republic. Baghdad may have a lot of religious politicians, but the country does not give absolute power to scholars.

That is why the Iranian elite might aim for someone with more of a political background than a religious, scholarly one. Ali Khamenei was considered a relatively junior cleric when he won the position after Ruhollah Khomeini’s death in 1989, but his choice was facilitated by some fundamental changes to Iranian law that Khomeini might not have agreed with.

“In 1989, the Iranian constitution was changed to give political experience more weight when choosing a Supreme Leader. This is some people think that Khamenei’s son could become Supreme Leader, even though he has much less religious scholarship behind him. He is not even an Ayatollah, let alone a marja," said the expert.

For Iranians the issues with the system might not be as much ideological as they are experiential. Iranians have been under formal religious government for over 35 years, and according to Mr. Javedanfar are fed up with the system.

He comments “I think people are just sick of the system. Many people travel to Qom (a major seminary city in Iran) and speak with the students there. They are worried about their reputation outside Iran, about how the religious (sic) is forced upon the population. When people see corruption at the top, they worry about their reputations in places like Iraq where religion has more of an advisory role.”

Considering other candidates, he has a hard time seeing anyone else other than Shahdouri as an obvious replacement, noting "again, this is all just speculation, but other popular names have issues. (Former President) Ali Rafsanjani is controversial with conservatives. Mesbah Yazdi is considered too extreme and he is older. He also reportedly has a number of health problems.”

It could just be that Iranian distaste for cronyism will lead to the choice of a more established scholarly candidate over a political figure Iranians expect to be corrupt.

Javedanfar is constantly careful to remind that many rumors about declining health are simply that – rumors. Many people have tried guessing who might be next in line for a while, but they are working with very little information. He includes himself in that.

But he adds that in order to make sure the diverse appeal of Khamenei to different Shi`ite communities is maintained, "they will have to choose someone who is established.”