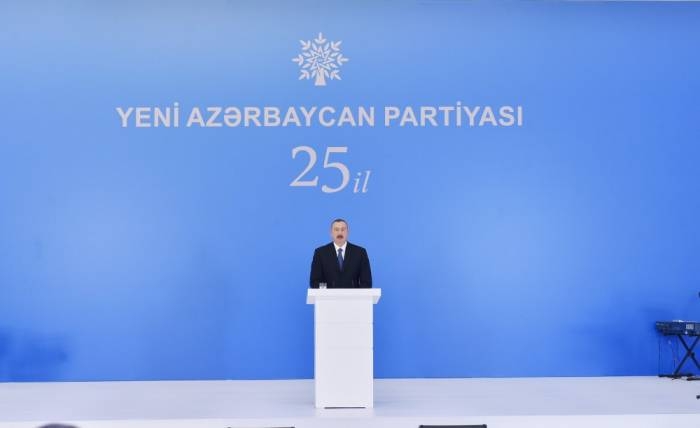 The establishment of the New Azerbaijan Party (YAP) was a turning point in the history of modern Azerbaijani statehood, said President Ilham Aliyev.

The president made the remarks at a solemn ceremony held on Tuesday to mark the 25th anniversary of the founding of YAP.

“Twenty-five years ago, 91 patriotic people appealed to national leader Heydar Aliyev to undertake the mission of creating the party,” he said.

The head of state reminded that the conference for the party’s establishment was chaired by Heydar Aliyev himself in Nakhchivan.

"It was a great historic event. At that time, the APF-Musavat couple did not allow the conference to be held in Baku. More than 500 delegates from different parts of the country came to Nakhchivan to attend the conference. That was a turning point in the history of modern Azerbaijani statehood,” noted President Aliyev.

The president also underlined Heydar Aliyev's service to the people of Azerbaijan at all times, saying that during the national leader’s reign, the country developed comprehensively.

"In the early 1990s, the government in Azerbaijan had lost the people’s confidence and the country was virtually in mischief. The chaos and anarchy was raging throughout the country, with bribery commonplace. Our lands had been occupied. There were economic and industrial crises. All this was posing an impending threat to Azerbaijan. The people appealed to Heydar Aliyev and the establishment of the New Azerbaijan Party became a necessity. The creation of the party opened the way for Azerbaijan to gain independence. Today YAP has some 700,000 people in its ranks,” added Ilham Aliyev.