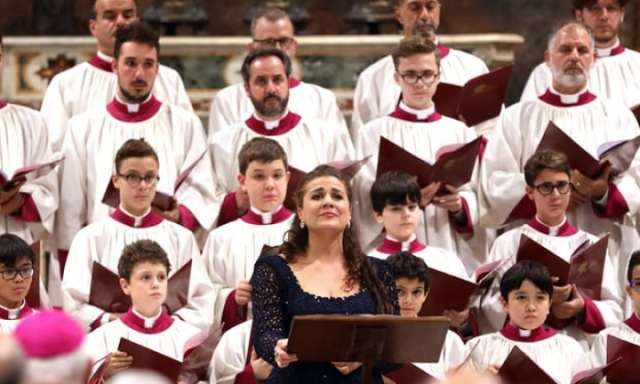 For the past 500 years, beautiful sacred music has echoed up towards Michelangelo’s sublime ceiling frescoes in the Sistine Chapel, performed exclusively by male choirs. Until now.

In a development that will delight both music lovers and reform-minded Catholics, one of the church’s gender taboos has finally been broken. Cecilia Bartoli, one of Italy’s most celebrated classical singers, has become the first woman to perform inside the chapel with the all-male Sistine Chapel Choir, as part of a unique musical project which draws on ancient, neglected musical archives of the Catholic church.

On Friday night the mezzo-soprano joined the 20 men and 30 boys who make up the choir, among the oldest choral groups in the world, to sing Beata Viscera, by the Renaissance composer Pérotin.

A few days before, the five-time Grammy award-winner told the Italian newspaper Corriere della Sera that she was “in seventh heaven” about the prospect of performing in the chapel, and [possibly] before Pope Francis.

“It’s a huge privilege,” she added. Bartoli’s dream of meeting Pope Francis was not fulfilled – he was unable to attend the performance – but the singer made a huge impact on the choir.

“She was incredible,” Mark Spyropoulos, the first British full-time member of the choir, told the Observer after the show. “She’s well known for her interpretations of early music and it was great for us to be recording with someone like that. Women sing with a different timbre to men, so to hear that sound, the wonderful richness that women sing with on that piece, is very unusual in the Sistine Chapel … because, of course, it’s an all-male choir.”

Spyropoulos, a former flower presenter at the Royal Opera House in London’s Covent Garden, was particularly enamoured by her presence, especially having presented flowers to her at the end of shows she performed there.

“And now to have sung with her – it was amazing.” 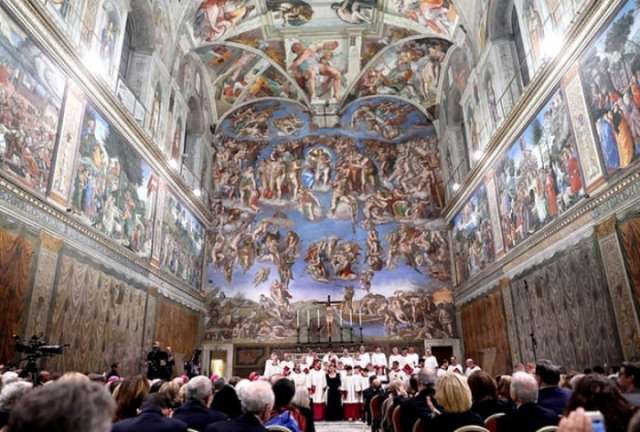 Bartoli’s voice also features on the pontifical choir’s 16-track Christmas CD, Veni Domine: Advent and Christmas at the Sistine Chapel, which was released in Italy in October and worldwide this month. The recording, made up of a repertoire of scores from manuscripts by the greatest composers of the Renaissance era, which are contained within the vast archive of the Vatican library, was produced in the chapel in part because of its unique acoustics, but also because three of the compositions had originally been produced to be sung there for papal celebrations and had never been performed in modern times.

“This new production, focusing on the liturgical time of Christmas, is based on the unique characteristic of translating into sound the manuscripts present in the Sistine Chapel archive, a truly precious treasure chest,” said Archbishop Georg Gänswein, prefect of the papal household, during a press conference at the Vatican on the day the album was released.

It is the third album produced in partnership with Universal Music Italia and the German classical music label Deutsche Grammophon, with proceeds from sales going to the papal charities.

“It’s ancient music, with its simplicity,” Bartoli told Corriere. “And to sing that music in the place it was conceived was fascinating.” She described the acoustics of the chapel as “generous, and ideal for this type of repertoire; the voice travels naturally”.

Federico Capitoni, a journalist and music critic for the daily newspaper La Repubblica, said that the inclusion of a woman in the choir was a “significant gesture of openness by the Vatican”. Once the decision had been taken, the 51-year-old Bartoli was an obvious choice. “Her voice is especially predisposed to the music from that period, as well as her character – the lightness and subtlety,” he told the Observer. “And she is probably the most famous Italian mezzo-soprano; it’s inevitable they chose her.”

The choice marked a monumental shift in a choir which formed in the 15th century and enjoyed a golden period during the Renaissance before suffering a decline in the second half of the 20th century, when it earned the unfortunate nickname of “the Sistine screamers”.

More recently, under the leadership of Monsignor Massimo Palombella, a Salesian priest appointed choirmaster by Pope Benedict in 2010, the group has been enjoying a revival, even undertaking its first tour of the US in 30 years in September. Nowadays, men no longer have to be ordained, unmarried or Italian to join the choir. So it was probably only a matter of time before a woman was allowed in, although it’s unlikely to be a regular occurrence.

“The problem is, our repertoire is written for men, with the bulk of it being written in the pre-15th century and 16th century,” said Spyropoulos, who joined the choir in 2015.

“As a choir in the Sistine we have to sing with a very aesthetic precedence, so it’s difficult to include women in this particular choir. Personally I’m a great advocate of women singing choral music – it’s fantastic. But this is really a question of the right timbre for this kind of music.”

In her interview with Corriere, Bartoli, who became artistic director of the Salzburg Whitsun Festival in 2012, spoke about the lack of women in orchestras. “There is still so much to do [in that respect],” she said.

Capitoni disputes this observation: “Her experience of things is no doubt different, but it’s a question of changing times. A few generations ago, there were few women but today I come across many who are studying music, singing and performing.”