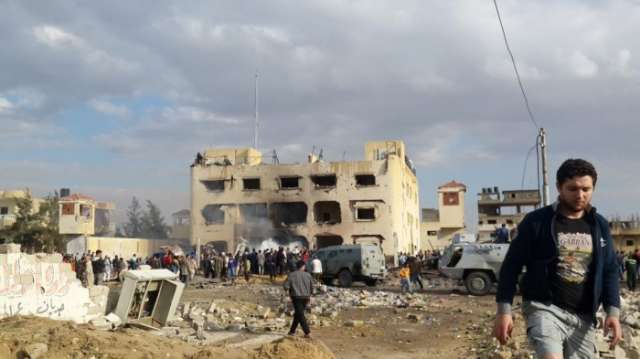 Egypt on Saturday said an attack on a mosque by militants in the country's troubled region of northern Sinai has killed 305 worshippers, including 27 children, a dramatic increase in the death toll previously announced, which was 235, AzVision.az reports citing CNBC.

It said the attackers, estimated at between 25 and 30, arrived at the mosque close to the small town of Bir al-Abd in five all-terrain vehicles and positioned themselves at the main door and the facility's 12 windows before opening fire. They also torched seven cars parked outside the mosque, which belonged to worshippers inside.

Quoting testimonies given to investigators by survivors, the statement said some of the attackers were masked. Those who were not sported heavy beards and long hair. The militants wore camouflaged pants and black T-shirts, it added.

Also on Saturday, Egyptian warplanes were in action over Sinai, according to the military, targeting several vehicles in which some of the culprits of the attack were traveling. All passengers of the vehicles were killed, it added. It was impossible to independently verify the claim since the media is virtually banned from working in Sinai.

The chief prosecutor's statement was the most detailed by authorities on the attack, the deadliest by Islamic extremists in Egypt's modern history. The account it gave generally agreed with what witnesses told The Associated Press on Saturday in the Suez Canal city of Ismailia, where some of the wounded are hospitalized.

They spoke of horrific scenes during the approximately 20 minutes it took the militants to kill and maim worshippers. They spoke of some jumping out of windows, a stampede in a corridor leading to the washrooms and of children screaming in horror. Some spoke of their narrow escape from a certain death, others of families that lost all or most of their male members.

One witness, Ebid Salem Mansour, said the imam had barely made it atop the mosque pulpit to deliver the sermon when intense gunfire rang out. "We knew that the mosque was under attack by (militants)," he said, recounting an attack that constitutes a grim milestone in Egypt's brutal fight against increasingly emboldened militants.

Mansour, a 38-year-old worker in a nearby salt factory, said he settled in Bir al-Abd, the small town near where the attack took place, three years ago to escape the bloodshed and fighting elsewhere in northern Sinai. He suffered two gunshot wounds in the legs on Friday.

"Everyone layed down on the floor and kept their heads down. If you raised your head you get shot," he said. "The shooting was random and hysterical at the beginning and then became more deliberate: Whoever they weren't sure was dead or still breathing was shot dead."

Militants killed 235 people at a mosque in Egypt's north Sinai region on Friday, detonating a bomb and shooting at fleeing worshippers and ambulances, state media and witnesses said, CNBC reports.

It was one of the deadliest attacks in the region's Islamist insurgency. No group claimed immediate responsibility, but since 2014 Egyptian security forces have battled a stubborn Islamic State affiliate in the north of the mainly desert Sinai, where militants have killed hundreds of police and soldiers.

Militants attacked a mosque in Egypt’s northern Sinai Peninsula on Friday, killing at least 155 people in one of the deadliest assaults on civilians during an insurgency against the government of President Abdel Fatah al-Sissi, Washington Post reports.


There was no immediate claim of responsibility. But Egyptian security forces have struggled for years to pacify a deadly insurgency by an Islamic State affiliate based in the Sinai Peninsula that has taken the lives of hundreds of police and military personnel.

The latest bloodshed in the town of Bir al-Abd suggests that militants retain the ability waged coordinated attacks on both the public and government targets.

The mosque was hit by a suicide bomber as well as gunmen, according to Egypt’s ambulance authority and officials quoted by Egyptian state television. But further details about the attacks, including the number of assailants, was not immediately clear.

Photographs circulated by local news outlets purportedly showed the aftermath of the bombing: dozens of bodies covered with blankets or bloodied sheets, laid in rows inside the mosque.

The insurgency gathered momentum after the military coup in 2013 that ousted Mohamed Morsi, Egypt’s first elected president and a leader of the Islamist Muslim Brotherhood.

The militants have repeatedly mounted large-scale, complex attacks on security personnel. Since July 2013, at least 1,000 members of the security forces have been killed in attacks in Sinai, according to data compiled by the Tahrir Institute for Middle East Policy.

Assaults on civilians — like Friday’s mosque siege — have been more rare. The Islamic State affiliate in Egypt, called Wilayat Sinai, had previously claimed responsibility for the downing of a Russian airliner over Sinai in October 2015 that killed all 224 people on board. The militants have also increasingly targeted Egypt’s Coptic Christian minority, as well as Sufi Muslims, considered heretics by the Islamic State.

At least 54 people have been killed after suspected militants set off a bomb and opened fire at a mosque in Egypt's restive northern Sinai province.


The attack on Friday targeted supporters of the security forces attending prayers there, two eyewitnesses and a security source said.

Suspected militants set off a bomb and opened fire at a mosque in Egypt’s restive northern Sinai on Friday, targeting supporters of the security forces attending prayers there, two eyewitnesses and a security source said.

No casualty figures were immediately available from the attack on Al Rawdah mosque in Bir al-Abed, west of Arish city, but eyewitnesses reported ambulances ferrying wounded from the scene to nearby hospitals.