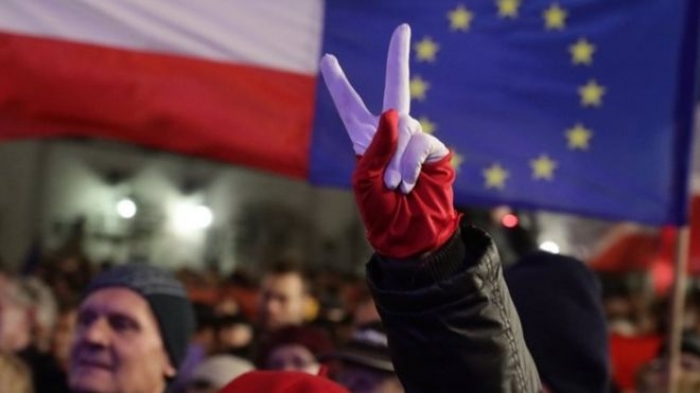 Thousands of people have protested in Poland after MPs from the ruling party gave initial backing to controversial bills to reform the judiciary.

If approved, the two bills would give parliament and the president a greater say over the nomination of judges.
In July, President Andrzej Duda vetoed a version of the bills.

But the Polish opposition as well as the EU say the revised versions drafted by Mr Duda's office still threaten the rule of law.

On Friday, protests took place in dozens of cities across Poland, with a large crowd gathering in the capital, Warsaw.

They say that hardly anything has changed in the revised bills that violate the country's constitution.

The European Commission has already said it is concerned that certain aspects of the bills - such as forcing 40% of Supreme Court judges to retire - are not compatible with EU law.

The PiS (Law and Justice) government - which is backed by a majority in parliament - says the reforms are needed to curb inefficiency, corruption and the influence of the former communist elite.

However, details of the revised bills are yet to be made public.

People here say the government wants to pass laws that will put politicians and the justice minister in charge of the appointment and dismissal of judges.

They say those laws will give it the tools to politicise the judiciary, stripping it of its independence. And if the government controls the courts, they say then that jeopardises the holding of free elections.

Like similar demonstrations in July, the protest attracted many young Poles and the organisers made an effort for it not to be directly connected to the opposition political parties. Instead, actors and celebrities read prose and poetry.

The government has already passed legislation to take control of the public media, the civil service and is leaning on NGOs it doesn't like, protesters say.

The government says this is nonsense, the courts are in dire need of reform, and democracy is not under threat in Poland.

In July Mr Duda vetoed two bills which would have allowed the justice minister to appoint senior judges.

But he approved a third, which gave the government the right to name the heads of lower courts.

The bills prompted a wave of mass demonstrations.

The EU has threatened to impose sanctions if the bill were adopted.

Since coming to power in 2015, the PiS has been at loggerheads with the EU over the governing party's push to toughen Poland's migration policies and media laws.