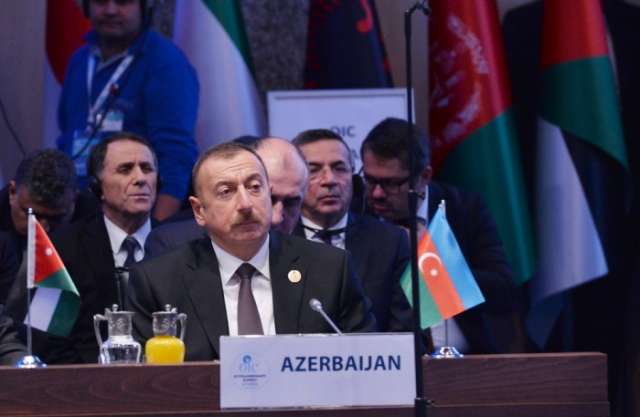 President of Azerbaijan Ilham Aliyev said that the US President's decision to recognize the city of Jerusalem as the capital of Israel causes a great concern.
President Ilham Aliyev made the remarks at the extraordinary summit of the Organization of Islamic Cooperation (OIC) in Istanbul on Dec.13.

"Donald Trump's decision may disrupt peacemaking process of conflict between Palestine and Israel and may lead to dangerous results in the Middle East. We consider, the United Stats of America should reconsider its decision", the head of state said.

"Azerbaijan supports peaceful resolution of the Israeli-Palestinian conflict and stands beside the Palestinian people. Azerbaijan stands for the two-state solution of the Palestinian conflict with East Jerusalem as the capital of the State of Palestine. Azerbaijan has hosted two successful conferences, namely, “The donor’s conference to finance the strategic plan for the development of the city of Al-Quds Al-Sharif” and “The establishment of Islamic financial safety net in support of the state of Palestine” in 2013 and made significant donations for the development and maintenance of the holy city’s infrastructure. Azerbaijan hosted the International Conference on the Question of Jerusalem under auspices of the United Nations Committee on the Exercise of the Inalienable Rights of the Palestinian People with the support of the Organization for Islamic Cooperation on July, 2017. The Conference provided up-to-date information on the current situation in East Jerusalem under occupation, examined the latest developments, and explored practical ways. We reaffirm our solidarity with the Palestinian people and our persistent support for the just and lasting solution to the question of Palestine".