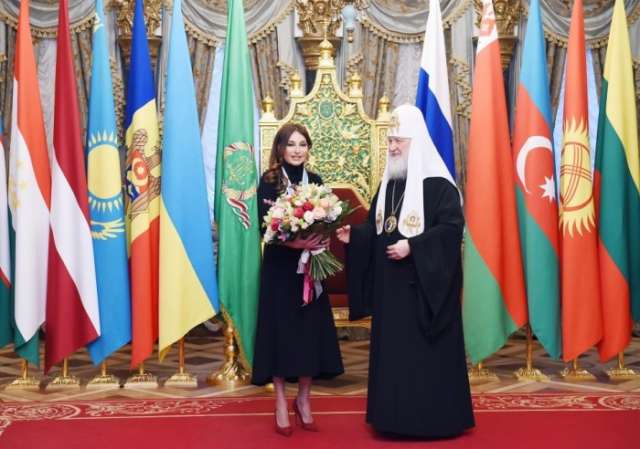 "In recent years, Azerbaijan has become one of the recognized centers of interethnic, interreligious and intercivilizational dialogue in the world," Azerbaijan's First Vice-President, president of the Heydar Aliyev Foundation Mehriban Aliyeva stated it at the ceremony to present the Order of the saint Equal to the Apostles Duchess Olga of the 2nd Degree, a high order of the Russian Orthodox Church.

Mehriban Aliyeva noted that authoritative international forums are regularly held in Baku aimed at creating mutual understanding and mutual respect: "In 2010, with your high participation in the capital of our Motherland, the World Summit of Religious Leaders was held. In 2006, the 7th Global Forum of the UN Alliance of Civilizations was held in Baku. On December 21 of this year there was a forum dedicated to the "Year of Islamic Solidarity" and the theme of this forum was again the creation of a dialogue between peoples, between representatives of various religions. Taking this opportunity, I want to express my deep gratitude to you for your message to this forum and for the high representation of the Russian Orthodox Church."

"We are a country that highly respects its roots, its traditions, its history. But, at the same time, we are a country open to the world. We want to build friendly relations with other states and other countries, and relations between Russia and Azerbaijan are built today on the basis of good-neighborliness, mutual respect and friendship. Azerbaijan and Russia are strategic partners, and our cooperation in the humanitarian sphere occupies a very important part in this partnership, of course. We have a huge layer of common cultural heritage, and our cooperation in the humanitarian sphere was formed in those years when Azerbaijan and Russia were still part of one state. It is very gratifying that after the restoration of independence, Azerbaijan not only has not lost, but, on the contrary, has multiplied this potential. Today in Azerbaijan there is an inexhaustible interest in the great Russian literature and culture. In schools, the study of the Russian language is fully preserved. We have 300 schools in the country, even more than 300 schools, where the educational process takes place entirely in Russian. In the capital there are the Azerbaijan State Russian Drama Theater, Baku Slavic University. The trend of opening branches of the leading Russian universities in Azerbaijan - we have a very successful branch of the Moscow State University named after Lomonosov, a branch of the First Moscow Medical University named after Sechenov - this is another example of our successful cooperation. We have very warm, friendly relations with the Astrakhan region. This is our friend, this is our neighbor and here is a great example of successful cooperation. Of particular importance to us is the discovery, the erection in 2013 of a monument to Saint Equal-to-the-Apostles Prince Vladimir. The best Azerbaijani artists and architects worked on the creation of this monument. Within a year they created a magnificent monument, which expresses our deep respect for the Russian Orthodox Church."

Speaking at the award ceremony, Patriarch Kirill said: "I would like to thank you heartily for the hard work you are carrying. You play a very important role in the life of your country and your people. But as a man with so many talents and remarkable spiritual qualities, you also do a lot outside of your homeland. And today the award was given to you for your assistance in the activities of the Russian Orthodox Church and for your special participation in the life of the city of Astrakhan."

"When I visited Astrakhan, I was told a lot about many things, but probably most of all I was told about you and how much good you did for this city. That is why, being in Astrakhan, I decided to honor you with the Order of the Russian Orthodox Church of the Holy Equal-to-the-Apostles Princess Olga, who was the grandmother of Prince Vladimir. The very same Prince Vladimir, who baptized Rus, and which, in fact, played a decisive role in the formation of a unified Russian state. I would like to express my gratitude to you, wish you God's help in your labors, good health, successes in your political and professional activities, and through your efforts of your esteemed spouse-prosperity to the entire Azerbaijani people. I am glad to meet you and have the opportunity to express to you my respect, appreciation and give you a high award, " Patriarch Kirill said.