Why spending time outdoors could help your child's eyesight 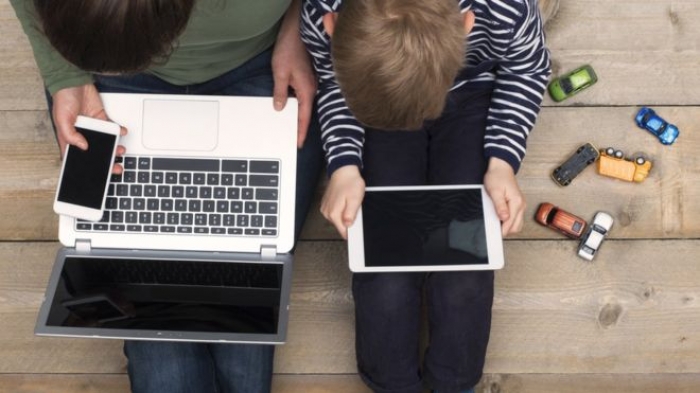 Playing on electronic devices certainly doesn't help their waistlines, but do you ever wonder what regular device use is doing to their eyesight?

While there isn't much research out there yet about the impact of screens on eyesight - after all the iPhone was first unveiled by Apple in only 2007 - experts are concerned about growing levels of short-sightedness in children.

And they suggest the best thing parents can do to prevent it is to encourage youngsters to spend more time outdoors in the sunlight.

How short-sightedness is on the rise

There has been a massive rise around the globe in short-sightedness - or myopia as it's officially known - over recent decades.

"It has reached epidemic levels in East Asia, Singapore, Taiwan, South Korea, where approaching 90% of 18-year-olds are now short-sighted.

"In Europe, it's potentially getting up to 40% to 50% of young adults in their mid-20s who are short-sighted now in Western Europe. It's been gradually rising over the decades of the 20th Century from around 20-30%."

Why has it become so much more common?

"The main factor seems to be a lack of exposure to direct sunlight, because children who study a lot and who use computers or smartphones or tablet computers a lot have less opportunity to run around outside and are less exposed to sunshine and because of that seem to be at more risk of developing short-sightedness."

Prof Hammond says: "It may be that there's no coincidence that in East Asian countries, the most myopic ones all correlate with the maths league tables.

"These kids are being pushed with very intensive education from a very young age and spend a lot of time indoors studying everything close up and very little time outdoors.

"Therefore the concern is that all close work - like playing with the iPad and iPhone - carries the potential that it could make them more short-sighted."

So should we stop or limit screen use?

Well that's much easier said than done! Any parent will know that youngsters are like dogs with bones when it comes to their beloved phones and trying to get them off their devices is pretty much impossible - certainly without a massive argument.

Dr Dahlmann-Noor, who is a mother of three, says trying to stop screen use is probably an unrealistic aspiration.

"But, hand on heart, I don't think we can get away from this because they also have to do their school homework on laptops and iPads and they do their searches for background information on screens.

"If you're a teenager and you have got revision to do for GCSEs or A-levels then you can't really switch off, can you? So I don't think we will be reducing the screen use, really, in years to come."

Time outdoors is the key

The best thing to do, say the experts, is to get children playing outside as much as possible.

"In a perfect world, probably on average across the week and the weekend, two hours a day outdoors is protective of becoming short-sighted in children."

He says myopia research done in Sydney, Australia showed that only 3% of Chinese-heritage children living in Sydney - who spent two hours a day outdoors - were short-sighted by the age of six, compared to nearly 30% of six-year-olds in Singapore.

"So again, suggestive that the outdoor lifestyle is good for our eyes."

And don't forget your veg

Dr Dahlmann-Noor says diet is also an area where families can help with eyesight.

"We always tell parents about omega-3 essential fatty acids, and vitamins A, C and E and nutrients that are good for the back of the eye.

"Healthy diet really is important - in terms of getting oily fish, avocados, green vegetables, green leafy vegetables as much as possible.

"Or in children, all these supplements that you can buy over the counter that are good for the brain, also happen to be good for the eyes - they're just not marketed for that."

How would I know if my child was becoming short-sighted?

According to NHS Choices, signs that your child may be short-sighted include:

- sitting close to the television

- complaining of headaches or tired eyes

When someone's short-sighted, the eyes have grown slightly too long, which means light rays focus just in front of the retina, at the back of the eye, so distant objects to appear blurred, but close objects are seen clearly.

While levels of myopia are likely to continue to rise, the hope is that researchers will find ways to reduce its progression.

Dr Dahlmann-Noor says: "What we need to look at, in terms of research and development, is ways of modifying the impact that these activities have on their visual development."

Prof Hammond adds: "There are eye drops and other treatments to slow myopia progression. But in terms of preventing myopia itself, there isn't any data out there at the moment in terms of 'Could the drops we use to slow progression stop myopia developing at all?'

"I think it's going to be the logical next step of research studies, as in countries like urban China - where 10% of children in each class per year are becoming short-sighted from about the age of six - there's an argument for saying we should be trying to prevent it."