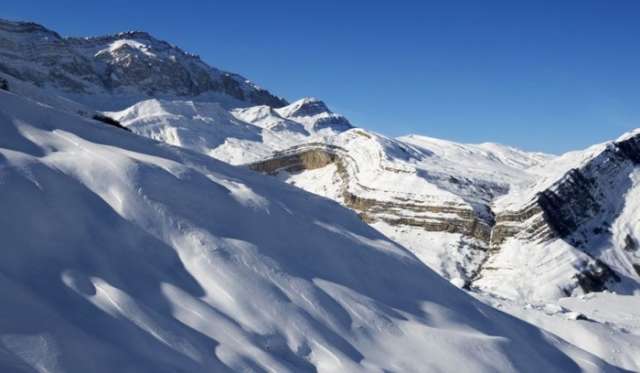 Nestled between the Caucasus Mountains and the Caspian Sea, Azerbaijan has been called “The Land of Fire,” and this place of mystery and enchantment lures travelers with a taste for the exotic and an appreciation for subtle beauty.

Few places on Earth better showcase the meeting of East and West, past and present, and Azerbaijan’s capital of Baku is known as “The Paris of the East.”

Modern skyscrapers rise like glass sails above the Old City’s 12th century Maiden Tower, forming a cityscape that is magical by day and enchanting in the evening. History comes alive in Azerbaijan, and the bejeweled past is on full display in palaces, museums and shops that draw nearly three million visitors each year.

Here are five reasons you may want to book Baku as your next port of call:

1. Getting to Azerbaijan has never been easier. Visitors to countries in the former Soviet Union often sigh at the thought of visa hassles. But getting a visa to Azerbaijan got a whole lot easier in June when the timeframe for obtaining an ASAN Visa was reduced from three days to just three hours! See for yourself. Apply here.

2. Baku is where cultures and civilizations meet. Long considered the pearl of the Caspian Sea, Baku is a dream city perched on a peninsula surrounded by water. The city’s architecture juxtaposes medieval treasures with iconic contemporary structures such as the internationally recognized Heydar Aliyev Center, designed by the late Dame Zaha Hadid. When the Irish pop band U2 envisioned “oil fires at night,” they might have been sitting at one of the glamorous cafes by the Caspian in Old Baku.

3. Amazing sights and nature. Beyond Baku, there is much to do and see on brief excursions. For instance:

Travelers of all ages will delight in the ancient cave art at the cave in Gobustan National Park and nearby mud volcanoes. Don’t miss the Zoroastrian temple “Ateshgah” (“The Fire Temple”) in the village of Surakhany, which draws pilgrims from India and from around the world. In ancient times, deposits of natural gas, lying too close to the surface, burst upward from cracks in the ground and caught fire, leaving flames dancing between the rocks. Anyone visiting the temple immediately understands why Azerbaijan is called “The Land of Fire.”

When it comes to recreation, Azerbaijan offers both surf and snow. While it is well known for its seashore, the country now boasts two new mountain resorts for skiers and snowboarders at Shahdag and Tufandag.

Despite its relatively small size, Azerbaijan is home to nine of the earth’s twelve climactic zones! From the snow-capped peaks of the Gusar and Guba Mountains to the lush subtropics of the Talysh Valley, there is nature and wildlife galore. Birdwatchers flock to the Gizilagai Reserve to see Europe’s largest waterfowl migration in the winter, and there are over 50 species of rare and endangered plants in the Ilisu Reserve. For the Indiana Joneses among us, the Shirvan Reserve is known for its sunken, ancient cities. Half of the world’s mud volcanoes can be found nearby.

4. A Sporting Nation. Athletes around the world find Azerbaijan the perfect place to showcase their talents at sports and games of skill, facing off with competitors at world-class facilities.

For the second year in a row Baku is hosting one of the stages of the Grand Prix of Formula 1 competition, and this will continue throughout the coming decade. What makes the Baku race unique is that the racers here compete not on a dedicated track, but on the actual streets of the city. Spectators and participants agree that the Baku stage of the Formula 1 competition is one of the fastest and most spectacular spectacles to behold in motorsports.

5. Tax free shopping in a land of treasures. Baku now hosts a biannual Shopping Festival featuring local and international brands. For a month during both spring and autumn 2017, vendors in Baku offered jaw-dropping discounts to savvy shoppers. Visitors to Azerbaijan can also take advantage of the convenient Tax Free shopping system any time of the year. Partial refunds on purchases made at shops displaying Tax Free signage are paid to foreign citizens in the airport upon departure from the country.

There are many more reasons to visit Azerbaijan: to taste amazing local cuisine; to listen to live Mugam music, declared by UNESCO to be one of the masterpieces of the oral and intangible cultural heritage of mankind; to take up rock-climbing and reach the peaks of the Gyzylgaya, Shahdag, Yarydag Mountains; or simply enjoy the unique and cozy atmosphere of hospitality that has reigned in Azerbaijan for many centuries.

Everyone can find so many reasons to return to Azerbaijan time and time again.

The original article was published in The Washington Post.