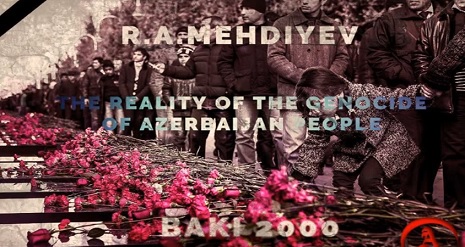 In his book, full member of the National Academy of Science, outstanding philosopher and scientist, Ramiz Mehdiyev, uses scientific evidence to reveal the crime January 20th crime.
AzVision.az presents for the first time the audio version of “The reality of the genocide of Azerbaijan people” book by the Head of the Presidential Administration, academician Ramiz Mehdiyev.

The audiobook has been prepared on AzVision.az own initiative.

Thus, for the first time history of the 20 January carnage, its sociopolitical roots (events and proc-esses caused the 20th January tragedy) have been objectively elucidated from the scientific point of viewin R. A. Mehdiyev`s book " The reality of the genocide of Azerbaijan people ". There is a number of otheraspects of the January 20th crime: Azerbaijan leadership`s treacherous position at that time, Kremlin`sopen support to and protection of Armenian separatists of Nagorni Karabakh, information war against theAzerbaijan people, pro - Russian stand of the Western states and US, stimulation of Armenian Diaspora`s and chauvinists` activity and other details were skillfully uncovered in this work.The most valuable and urgent conclusion of the book is "to objectively and professionally informthe world society about Azerbaijan truth and to create unbiased and faithful public opinion regardingprocesses taking place in the republic, using wide opportunities of mass media, state bodies and publicorganizations. It is important in order to prevent a recurrence of the "Black January"!"Thereby, Ph. Doctor R. A. Mehdiyev`s work "The reality of the genocide of Azerbaijan people " might be considered as his well - founded charge against initiators of the bloody crime committed againstAzerbaijan people and in author`s words «per se against the whole humanity». Charges of the Interna-tional Court of Justice are awaiting them, like the Nuremberg process.

You can also read the book here